The pair got married after over a decade together

After over a decade together, Jerry Rice and Latisha Pelayo are married!

The couple tied the knot at Calistoga Ranch in Napa Valley on Sunday, exchanging vows by the beautiful lake on-property, PEOPLE confirms.

Guests then enjoyed cocktails in the vineyard, while a mariachi band played. During the reception, guests dined on the lawn by candlelight, with a jazz trio offering up sweet serenades. Finally, the couple’s friends and family moved into Calistoga Ranch’s wine cave to cut Rice and Pelayo’s four-tier wedding cake and eventually dance the night away.

The cave was decorated by custom scented candles made by Pelayo’s sister, who owns company Fiamma Candle. The happy day was produced and planned by Emily Coyne Events in conjunction with Alexis Raine Events, and captured by photographer Julie Kay Kelly.

The couple’s dreamy florals were designed by Pico Soriano Designs.

Rice, 57, and Pelayo got engaged in March 2018, with the Hall of Famer proposing at the DeBartolo Family Foundation All-Star Charity Gala in Tampa, Miami, according to TMZ Sports.

In video footage of the sweet proposal obtained by TMZ Sports, Rice was shown standing at the podium at the event with Pelayo standing off to his left.

Rice was previously married to Jacqueline Bernice Mitchell. The couple divorced in December 2009 and share three children together. 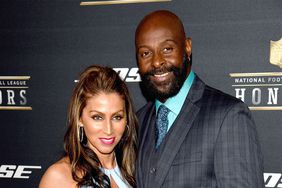