Aaron Rodgers is finding out just how much a military death can impact a veteran’s family.

The Green Bay Packers quarterback paid a visit to four children who lost their fathers in the military through his web series, It’s Aaron, where he shows up unexpectedly to hang out with people whose lives have been impacted by non-profits in Wisconsin.

In past videos, he’s met with a girl with cancer through Gold In September and surprised the dean of Milwaukee College Prep, an elementary school in Milwaukee.

In this case, it was kids who attended Camp Hometown Heroes, which is a weeklong camp for kids who lost a loved one while they were serving in the military. It helps them process their loss and meet kids who have been through similar experiences.

In this third installment of It’s Aaron, Rodgers, 33, met a boy named Dylan who was just 6 years old when his dad, staff sergeant Chad J. Simon, died. Dylan doesn’t remember much about him, but he wonders if he was the one who taught him how to tie his shoes.

Along with Dylan was three sisters – Alexis, Starr and Kylee – who also lost their dad in the military.

When Rodgers first showed up, Dylan was the most blown away. He immediately wanted a selfie to show his friends at school that he had met a NFL legend.

The children chatted with Rodgers about Hometown Heroes, did some fishing and the QB even signed Packers footballs for them.

The kids then showed Rodgers a quilt they made at camp, where they were asked to draw a picture of their lost loved one and write down a memory about them.

“I love camp, but I wish that day my dad died never came,” Kylee wrote on her square of the quilt.

“I kind of don’t know what to say, so I’ll just keep speaking my mind,” Dylan wrote on the quilt. “I miss you dad. I wish I had more time with you to hang out and to mess around like the dudes that we are haha. And I’m looking after mom in a way. I love you dad.”

Camp Hometown Heroes has set up a crowd funding campaign to help spread camps into different states, not just Wisconsin.

“The more we do this, you just find so many amazing organizations that are right here in our backyard and are doing some incredible work with kids,” Rodgers said in the video. 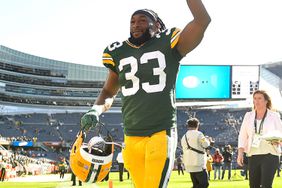