The new mascot for the Philadelphia Flyers hockey team, Gritty, has been both a source of mystery and hilarity since the NHL announced his debut

The new mascot for the Philadelphia Flyers hockey team, Gritty, has been both a source of mystery and hilarity since the NHL announced his debut in September this year.

And finally, sports and meme fans alike are getting some answers about the Internet sensation thanks to a new interview with Entertainment Weekly. In it, the bug-eyed, orange fur ball relives some of his favorite parts of his rise to fame and hopes for the future — namely a tryst with Kim Kardashian West.

When asked if he was heading for a “Kanye West-like meltdown” as a result of his success, Gritty asserted, “I’m predicting an Elon Musk-level ascension. All the way to the freaking MOON!” before propositioning the rapper’s wife, 38.

“Kim K, if Kanye really did melt and you need a shoulder to cry on, I’ve been told this fur works wonders to heal the soul,” he quipped.

It’s no surprise that the mascot would make a pass at one of reality TV’s sexiest ladies because sees himself as “Tall, dark burnt orange, and handsome,” according to the magazine. He provided this description as an alternative to how others have described him which includes “terrifying monstrosity” and “pure nightmare fuel.”

Then Gritty added, “Those nightmares get about 29 miles to the gallon, so I’d say the fuel level is great.”

According to the NHL, Gritty has quite the backstory. Calling Gritty “talented but feisty” and “loyal but mischievous,” its website says, “He claims that he’s been around for a lot longer than we know it, and recent construction at the Wells Fargo Center disturbed his secret hideout forcing him to show his face publicly for the first time.”

The mascot had a less-than-ideal first game when the Flyers lost to the Boston Bruins. He dramatically slipped on the ice and shot a man in the back with his T-shirt gun.

The internet had no shortage of thoughts on the mascot — ranging from fear to giggles.

Gritty even got in on the fun by tweeting a photo of himself posing like Kardashian West on the cover of Paper magazine. Jake Tapper replied, “Don’t ever change, Gritty.”

The players were as taken aback by Gritty as the fans were. According to Philly.com, Wayne Simmonds said in reaction, “Not my mascot.” 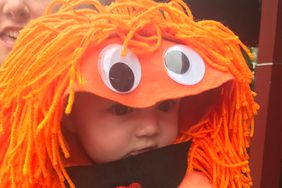