Simone Biles has been named the best female athlete at the 2017 ESPY Awards, besting some of sports’ fiercest competitors to nab the title.

“Every since Rio, it has been an amazing year and the best part of it all was meeting the young people. I want to thank you all for believing in me, it means the world to me. So, thank you,” she said in her acceptance speech after receiving her trophy from presenter Abby Wambach.

Biles asserted her dominance at the 2016 Olympics in Rio de Janeiro, taking gold in the women’s gymnastics individual all-around, floor and vault exercises.

She also won team gold with the rest of the U.S. “Final Five,” and took home bronze in the balance beam.

The 25th annual ESPYS are broadcasting live on ABC Wednesday, July 12, at 8 p.m. ET from the Microsoft Theater in Los Angeles. 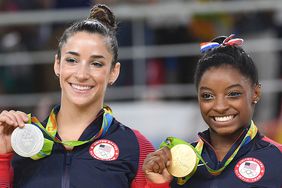