The retired NBA star turned 39 on Sunday, and his wife Gabrielle Union celebrated with a sweet video on Instagram that featured a montage of the couple and their 2-year-old daughter Kaavia James. Wade's three children, Zaire Blessing Dwyane, 18, Xavier Zechariah, 7, and Zaya, 13, are also featured in the video.

Zaire shared his own tribute to his dad on Instagram with a sweet father-son throwback photo. "3️⃣9️⃣🤞🏾 Love you deeper than the surface 🖤," he captioned the post.

Wade — who is also the guardian of nephew Dahveon Morris, 18 — married Union on August 30, 2014, in Miami, Florida, and the actress became a stepmother to his children. In 2018, the couple welcomed their first child, daughter Kaavia James, via surrogacy.

The former NBA star told PEOPLE last February that the key to his and Union's lasting bond is that they're always supportive of one another.

Wade also opened up about fatherhood to PEOPLE last February ahead of the premiere of his documentary D. Wade: Life Unexpected, discussing how his perspective of parenthood has changed since he welcomed his first child, Zaire.

Admitting he "always" has fears as a parent even presently, the athlete said he's "scared in a different way now" than when he became a first-time father at barely 20 years old.

"Now [Zaire is] 18 and I'm like, 'He's about to go to college' — I'm even more scared," Wade said. "When a kid is born, they don't come out with a pamphlet that's like, 'Okay, these are the directions for this kid.' So you just figure it out and try to help raise someone who's good and kind, and just characteristics that you want your kids to hopefully have. And that's in you already."

"You're afraid because you don't want to mess up; you don't want anything to happen to them," he continued. "But I think, ultimately, we all have it inside of us to help lead someone, whether that's your kids, godson or goddaughter, niece or nephew, coworker — we all have it in us to lead. It's no different when you have a kid." 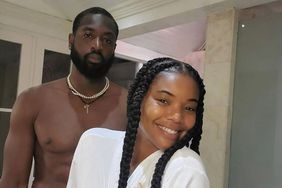 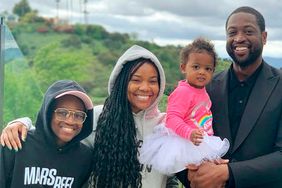