Dwyane Wade got put in the hot seat on Tuesday night.

The former Miami Heat superstar, 38, made an appearance on Andy Cohen‘s Watch What Happens Live, and the host made the retired basketball star play the show’s popular question-and-answer segment, Plead the Fifth.

During the game, Cohen gets to prod his guest with three hard-hitting questions and they’re only allowed to plead the fifth — or not answer — one of them.

Wade’s first challenge was to rank himself and former Heat teammates Chris Bosh and LeBron James from most to least talented.

“Oh, I’m going to be politically correct on this, from most to least,” he said with a laugh. “LeBron, Chris and Dwyane.”

As the crowd took in his response, he quickly quipped, “I’m lying!”

“Dwyane, Dwyane and Dwyane,” the NBA star then joked is the most accurate ranking.

Dwyane Wade Reflects on What Basketball Gave Him Ahead of Doc Release: ‘It Restored My Family’

His second question was about the recent controversy surrounding his judgement at the 2020 NBA dunk contest. Many seem to believe that Wade may have rigged the scores so that his former Heat teammate Derrick Jones, Jr. would win over the Orlando Magic’s Aaron Gordon.

“What is your response? This is a hot topic,” Cohen said to Wade, who ultimately decided to plead the fifth instead of commenting on the controversy.

This left Wade with one final question. The father of four — who is also the guardian of nephew Dahveon Morris, 18 — was asked to rank some of wife Gabrielle Union’s films.

Wade and Union, 47, got married in 2017. They welcomed daughter Kaavia James, 15 months, in 2018. The basketball star is also a father to daughter Zaya, 12 — who recently came out as transgender — and sons Xavier, 6, and Zaire, 18, from previous relationships.

In a recent interview with PEOPLE, Wade opened up about how his career on the court “restored” his family.

“The biggest thing that basketball has given me? It restored my family,” he told PEOPLE. “My family will not leave this earth without having made some kind of imprint.”

“Basketball has given me sort of like, ‘There go the Wades right there. We see them.’ So, I’m proud of that,” Wade, who had a rough childhood growing up in Chicago, said. “I’m proud of being the one in my family that could put us on the sheet somewhere where people will remember, hopefully, our impact as a family.” 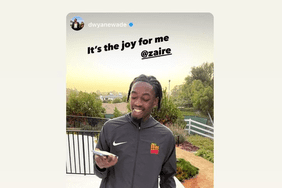