Dwyane Wade Jokes That He's the 'Fifth-Lead' in His Household: 'The Dogs Are Above Me'

Dwyane Wade's wife, Gabrielle Union, told Jimmy Kimmel on Tuesday night that having her husband around the house more has been "nice"

During a virtual appearance on Jimmy Kimmel Live! Tuesday, the couple joked about their at-home family dynamics having spent more time together since Wade's retirement from the NBA after 16 seasons back in 2019.

Nonetheless, Union — who shares 2-year-old daughter Kaavia James with Wade — told Jimmy Kimmel that "it was nice" to have her husband around more at home.

Dwyane Wade on the Secret to His Relationship with Gabrielle Union: She 'Doesn't Stop My Growth'

"Anybody out there, I'm open," joked Wade, who who recently announced he'd joined the ownership group of the Utah Jazz. "I just need to be away from being fifth-lead in my house. I'm like fifth-lead in this house now. The dogs are above me at this point."

"Shout out to Brady," Wade joked.

Wade and Union tied the knot on August 30, 2014, in Miami, Florida, and the Bring It On actress became a stepmother to his children. In 2018, the couple welcomed their first child, daughter Kaavia, via surrogacy.

In a recent interview with PEOPLE, the couple opened up about their lasting marriage to each other. "I'd like to say we've worked on it," said Wade. "It's about learning each other, learning what she wants for her life and for her career and trying to support all those things."

"This is both of our second marriages, and we're super transparent about that," Union told PEOPLE. "We didn't do it right, the first time around. There's another way — to be more collaborative and equitable. We humble ourselves, listen and we meet in the middle."

Last February, Wade told PEOPLE that the key to his and Union's lasting bond is that they're always supportive of one another. 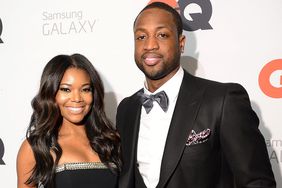