DeMarcus Cousins and Morgan Lang tied the knot at the St. Regis Atlanta in Georgia

The center for the Los Angeles Lakers married his longtime girlfriend Morgan Lang on Saturday in a lavish Georgia ceremony, PEOPLE confirms.

Cousins, a 29-year-old father of two, and Lang, 28, tied the knot at The St. Regis Atlanta, in a soiree planned by Lily V Events, who also provided rentals for the ceremony and reception.

“The entire event was amazing from TOP to Bottom… Literally,” the couple tells PEOPLE.

From Heidi & Tom to Joe & Sophie: All of the Celeb Couples Who’ve Tied the Knot in 2019

“We translated a millennial’s interpretation of old Hollywood and what it would be like in current times using Morgan’s love for flowers and ensuring the arrangements were just as towering as Demarcus,” wedding planner Lynn Ehumadu of Lily V Events says. “Demarcus’ sense of style made this modern glam wedding our clients’ dream come true!”

The bride walked down the aisle in a gown by couture designer Daughters of Nonyelum, while Cousins — who proposed on July 4, 2018 — opted for a tux by Rich Fresh.

Guests dined on food catered by the St. Regis, and enjoyed a delicious cake by Julie Miller Cake Design. Entertainment was provided by Trey Daniels Music and DJ Franzen.

The wedding comes after a difficult year for Cousins, who tore his ACL earlier this month, according to ESPN. The injury followed a quadriceps tear in April, and a left Achilles tear last January. Cousins had just signed a one-year deal with the Lakers in July, after spending much of last season out with his injury while playing for the Golden State Warriors. 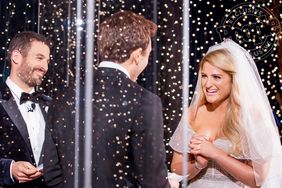