Former racer Danica Patrick and Green Bay Packers quarterback (and Game of Thrones extra) Aaron Rodgers enjoyed a night of music in Colorado over the weekend.

On Monday, Patrick posted a series of pictures from the couple’s night out at Red Rocks Park and Amphitheatre, where they listened to musicians Trevor Hall and Nahko.

“You know when you build something up in your head and as a result, there’s probably no way it could be better than that,” Patrick, 37, wrote in the caption of a picture of her and Rodgers smiling with a beautiful rock formation in the background.

“Last night proved that theory wrong! Red rocks was better than my limited imagination. Because it goes beyond a view or idea… it’s a feel and feelings are the key to any deep emotion.”

She added: “It was epic! We had a blast with @onwordjourneys and @offcamberbenbarnes watching @trevorhallmusic (@emoryhall and family were so fun and welcoming) and @nahkobear! and had some full moon energy to go with it!”

Patrick later posted a picture of her and Rodgers, 35, smiling with Hall and members of his family.

“Since this pic got cut off it deserves a repost so you can see just how happy we ALL were last night!” she wrote.

The lovebirds’ night out comes just weeks after they made some headline-grabbing television appearances.

Rodgers was roasted by the internet in late May when he failed to chug a beer during a challenge while sitting courtside at a Milwaukee Bucks playoffs game against the eventual NBA champion Toronto Raptors.

Earlier that month it was revealed that Rodgers made a cameo appearance in the penultimate episode of Game of Thrones. Despite the appearance, he later canned the finale of the show.

“Look, I love the opportunity to be in the show, which most people probably don’t think I was, but I was there,” Rodgers said. “I love the show, but the writers are also doing Star Wars, so I think they might have been a little busy.”

Patrick also served as an analyst during the 2019 Indianapolis 500 in May, where she broke down the complexities of the race car for NBC viewers, such as the video game-like controller of an IndyCar steering wheel. 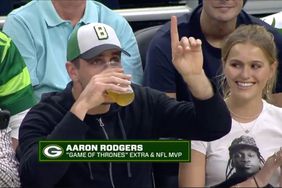 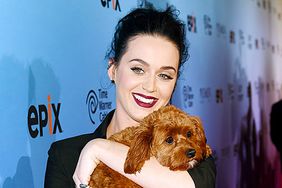 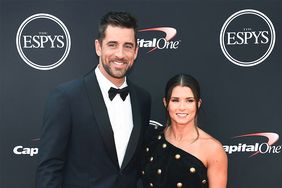 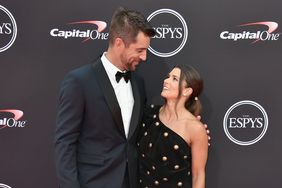