"It really went down to the wire, and you just don't know what's gonna happen until that very last second," Ciara said of husband Russell Wilson's decision

For Russell Wilson, opting to stay on as quarterback of the Seattle Seahawks wasn’t a cut-and-dry decision — even given the substantial paycheck.

The football star’s wife, musician Ciara, stopped by Watch What Happens Live on Tuesday night to open up to Andy Cohen about her husband’s freshly signed $140 million contract, revealing that a lot of thought actually went into the deal that has now made him the highest-paid player in the NFL.

“Was there a moment when you thought he wouldn’t take the deal?” asked the host.

“You know, it was a process,” said Ciara, 33. “It really went down to the wire, and you just don’t know what’s gonna happen until that very last second.”

The “Goodies” hitmaker also indirectly addressed buzz that Wilson, 30, was thinking about transferring to the New York Giants, saying, “There were a lot of rumors, but we love being Seahawks. Seattle’s amazing. It’s family. It’s ‘Go Hawks’ for life. This is a special time for us, and we’re glad to know that Seattle is continuing to be home.”

Cohen, 50, couldn’t help ribbing the singer a bit for the family’s new paycheck, presenting her with a bedazzled football that hilariously read, “I’M VERY RICH, BITCH!”

Ciara Says She’s a “Better Woman” Because of Husband Russell Wilson: “That’s What Marriage Is About”

Wilson accepted a four-year, $140 million extension deal to remain with the Seahawks, his agent Mark Rodgers revealed to the Associated Press on Tuesday.

“Russell’s goal and his hope was that he would continue his career with the Seahawks and continue to bring championships to this town,” Mark told the AP. “He believes there is still unfinished business and he is looking forward to pursuing that without having to worry about contracts and his future.”

His previous $87.6 million, four-year deal — which he signed in 2015 — was set to expire after next season. With the new agreement, Wilson will remain with the Seahawks through the 2023 season. It also comes with a $65 million signing bonus, a $107 million in guaranteed money and a very important no-trade clause, according to the AP.

Green Bay Packers quarterback Aaron Rodgers was the highest-paid player in the NFL before Wilson. Aaron, 35, makes an average annual salary of $33.5 million as part of the $134 million extension he signed last year. Wilson will now make an average of $35 million.

All of this appeared to make the athlete pretty happy. “Hey Seattle. We got a deal,” a smiling Wilson said in a video shared across his social channels early Tuesday morning. “Go Hawks.”

Ciara was just as joyful, cozying up next to her husband in the clip. “Go Hawks!” she cheered, before joking, “Finally we can go to sleep!”

The singer — who shares daughter Sienna Princess, 2 this month, with Wilson, and is also mom to son Future Zahir, 5 next month — celebrated more on Twitter Tuesday morning.

“Soooo proud of my love @DangeRussWilson,” Ciara wrote. “So excited Seattle is home! God is so good. The hardest working man I know! You inspire me so much! #GoHawks @Seahawks.” 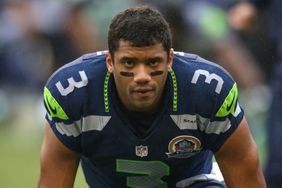