Kim and Kanye, Spike Lee and More A-Listers Who Cheered on Their Faves at the 2020 NBA All-Star Game

Courtside smooch! Kardashian West and her husband shared some rare P.D.A. at the basketball game following his Sunday Service in Chicago.

Rapper J. Cole had a pretty great seat for all of the action.

In fact, he was seated next to Kimye!

West also hung out with one-third of Migos, rapper Quavo.

Boseman enjoyed the game with his fiancée, Ledward.

He also caught up with Hudson, who performed a moving tribute to the late Kobe Bryant at the event.

Ludacris also stopped by to say hello to the pair.

2 Chainz paid tribute to the Lakers, who lost legendary Kobe Bryant in a helicopter crash just a few weeks ago, by wearing a 2000 Championship jacket.

Lee, seated near Queen Latifah, looked perplexed by a play.

Tucker hung out with Shark Tank investor Cuban. Do you think Mark's in or out?

Haddish had an All-Star moment when she posed with rapper Common and Milwaukee Bucks star Antetokounmpo.

Queen Latifah and Nichols smiled on the sidelines.

Paul, of the Oklahoma City Thunder, posed with Bennett, Tucker and Chance the Rapper.

Chaka Khan performed a rousing rendition of the national anthem to open up the event.

It was a family affair at the 2020 NBA All-Star Game! Stewart sat courtside with his son, Nathan.

While Wahlberg brought his son, Elijah, to help him cheer on the All-Stars.

Famed director Lee brought his son, Jackson, and a camera (of course)! 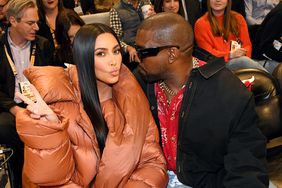 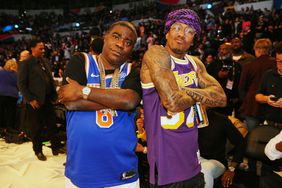