At Saturday's 500 Festival Mini-Marathon in Indianapolis, 18-year-old Benjamin Pachev placed 16th at 71:53 — an impressive finish, especially considering the Utah teen had run the race in Crocs

At Saturday’s 500 Festival Mini-Marathon in Indianapolis, 18-year-old Benjamin Pachev placed 16th at 71:53 — an impressive finish, especially considering the Utah teen had run the race without a pair of those pricy running shoes.

Nope, Pachev had an entirely different footwear of choice. Crocs.

The foam clogs, made famous by chefs like Mario Batali, are Pachev’s preferred running shoes.

“It’s like having a little fan that’s just streaming air over your foot,” Pachev told FOX-59 — adding that the Crocs can last him 2,000 miles (he averages about 65 miles/week).

That doesn’t mean that Pachev isn’t used to answering the Crocs question. “People look over at me and say what the heck are you thinking?” he said. “[They’re] so astonished be it because they’re not thinking outside the box.”

Lucky for Pachev, he’s not alone. He comes from a large family of Croc runners — including 42-year-old dad Sasha, who also ran the 500 Festival Mini-Marathon on Saturday in Crocs (his time was 76:07).

Sasha told Runner’s Worldin 2015 the family stumbled upon Crocs’ effectiveness as a running shoe one day when his kids showed up for a family run wearing the shoes — insisting they were real running shoes. Calling their bluff, he noticed his children ran as fast as ever — and looked smother than they did in running shoes.

The Russian native then tried them for himself, realizing they were like racing flats — only cheaper.

With nine kids at home between the ages of 2 and 18, and wife Sarah also running, Crocs just made sense. “I thought, ‘You shouldn’t have to pay $70 for a pair of shoes. It’s got to be simpler than that,’ ” Sasha said. “Running is so natural, you shouldn’t need something so expensive to run in.”

Since then, the Pachev family have done all of their training and racing in Crocs, Sasha says, for just over $20 a pair.

“It could be a commodity shoe that encourages people to run and not worry too much about budget,” Sasha added to Runner’s World.

“Today, running is kind a sport for the rich almost, even though it should be the most available sport regardless of your income. If somebody really had that mission of making an affordable running shoe, so that everybody could run in it and perform well, I think it can be done.”

As for Benjamin, who has a bachelor’s degree in applied mathematics from BYU, he’s just staying focused on running.

“When you push yourself to your limit, you’re a different person,” he told Desert News.

He has the support of Crocs — who shared on social media their support for the young runner. “Congrats to Benjamin Pachev for reaching #ComeAsYouAre level 100,” they wrote. “He ran a half marathon in 71 minutes while rocking the #Crocs.”

It's Another Day, Another Marathon, as Richard Bird Ends a Record Year on the Run

Like a Fine Old Timepiece, Marathoner Johnny Kelley Runs, but Never Runs Down 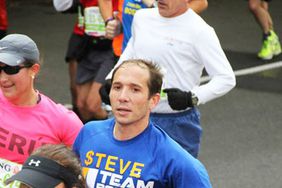 Mike Garritson Has Turned His Kids into Winners, but They May Be on the Fast Track to Burnout 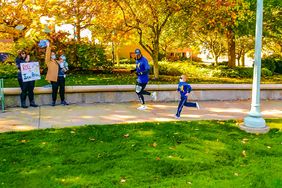