Abby Wambach tied the knot with author Glennon Doyle in 2017

Abby Wambach and Glennon Doyle are enjoying their wedded bliss!

In a new interview with WSJ. Magazine published on Monday, the retired soccer star and her author wife opened up about their nearly two-year marriage.

“To be in a relationship with another woman, there’s a ton of talking all the time,” Wambach, 38, told the outlet. “We’re so passionate about the work that we’re trying to accomplish. We’re trying to solve for big problems, we want equality, and it calls for a lot of discussion between us.”

“I think that’s one of the reasons we fell in love with each other,” Doyle, 43, added. “We were doing similar work before we even met, and it was like ‘Whoa, you’re like the business-slash-sports version of me.’ ”

“It’s like she’s Sporty Spice and I’m Spirit Spice,” Doyle continued. “We have so many of the same beliefs and goals.”

The couple tied the knot in May 2017 after confirming they were dating in November 2016, with the author and activist revealing the news of her “new love” on her Facebook page.

In the interview, the couple discussed being gay in conservative-leaning environments like Naples, Florida, where they reside.

“There’s one other gay woman in Naples,” Doyle joked, “and she lives with me.”

However, the couple says they’ve been met with openness as they travel around the country together promoting Wambach’s book Wolfpack.

“I just feel like we live in such a heightened time,” Doyle continued. “That any time anybody expresses a desire to know more, it’s labeled as hate. But really, there are so many people that just want to know: ‘Why is everybody so gay all of the sudden?’ So I find more curiosity than hate out there. Unless you’re on Twitter.”

During the interview, Wambach also spoke out about pay equality in professional soccer.

In the lawsuit, which was filed in Los Angeles federal court under the Equal Pay Act and Title VII of the Civil Rights Act, all 28 female players claim that they are not paid equally to the men’s national players.

“The women brought in $6.6 million in 2015 in profit and the men only brought in under $2 million, so the money argument can no longer take in any kind of hold in our consciousness,” Wambach said about the lawsuit to WSJ. Magazine, adding that men’s sports have “had years, sometimes centuries, of this major league sports branding. Of these sports’ marketing dollars.”

She continued: “So what are all the women athletes losing when we’re not getting the same number of marketing dollars that are being put into the men’s programs?” 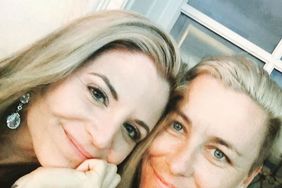