Will Princess Eugenie's Fiancé Jack Brooksbank Receive a Title After Their Royal Wedding?

Queen Elizabeth handed her grandson, Prince Harry, a dukedom on his wedding day to Meghan Markle in May, officially making them the Duke and Duchess of Sussex

Princess Eugenie and fiancé Jack Brooksbank will be getting the royal treatment at their Oct. 12 wedding at Windsor Castle — but will the new member of the family receive a royal title?

Queen Elizabeth handed her grandson, Prince Harry, a dukedom on his wedding day to Meghan Markle in May, officially making them the Duke and Duchess of Sussex.

However, Jack will not be receiving a royal title — he’ll simply be known as “Mr. Brooksbank.” According to the BBC, Eugenie “will keep her royal title when she marries Mr. Brooksbank,” but she will have the “option” to take his last name.

In 2016, Eugenie’s father Prince Andrew refuted reports that he had demanded titles for “any future husbands” of daughters Eugenie or Beatrice. At the time, Andrew said he simply wanted his children to be considered “modern, working young women who happen to be members of the royal family.”

Despite appearing alongside her family at royal events and supporting charitable causes, Eugenie works as a director at the London art gallery, Hauser & Wirth.

The 28-year-old is “is throwing herself into it,” an insider recently told PEOPLE of her job.

He “is a really lovely, very kind, down-to-earth man,” said a family friend. “He is great fun and has a great sense of humor. He is the first to laugh with you and not at you, and he is a practical joker, in a good way!”

Eugenie and her older sister Princess Beatrice are currently ninth and eighth in line for the British throne, respectively, just behind their father. While they received royal titles upon their birth, their cousins Peter Phillips and Zara Tindall did not, as they were the children of the monarch’s daughter (rather than one of her sons).

Princess Anne famously turned down the Queen’s offer to give her children courtesy titles when they was born. Their father, Captain Mark Phillips, was a commoner and also turned down a title that would have been given to him as a wedding gift from the Queen when he wed Princess Anne.

“I’m very lucky that both my parents decided to not use the title and we grew up and did all the things that gave us the opportunity to do,” Zara told The Times in a 2015 interview.

Beatrice, 30, recently told British Vogue that it’s difficult for the sisters to balance their everyday careers with their high-profile roles within the royal family.

“It’s hard to navigate situations like these because there is no precedent, there is no protocol,” Beatrice explained. “We are the first: we are young women trying to build careers and have personal lives, and we’re also princesses, and doing all of this in the public eye.” 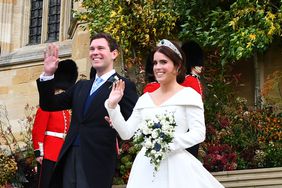