'The Crown' : How Queen Elizabeth's Cousins Secretly Lived in a Psychiatric Hospital

The Crown may be about to bring a tear to your eye.

While the Netflix drama's fourth season, streaming on November 15, focuses heavily on the emergence of Princess Diana (played by Emma Corrin) and her tragic relationship with Prince Charles (Josh O'Connor), it also details the heart-wrenching story of Queen Elizabeth’s first cousins Nerissa and Katherine Bowes-Lyon.

Born with severe learning difficulties in 1919 and 1926, respectively, the little-known royal relatives were committed to a psychiatric hospital at the height of World War II and remained in the care of medical professionals for the remainder of their lives.

In a tragic twist, the sisters – who were the daughters of the late Queen Mother’s elder brother John Herbert Bowes-Lyon – were also mistakenly listed as dead in the 1963 edition of esteemed royal genealogy guide, Burke’s Peerage.

According to a Daily Express report in 1996, it was not until the hospital trustees wrote to the Queen Mother in 1982 that the royal family became aware of their existence – a tear-jerking discovery that’s shown to have major repercussions in episode seven of the hit Netflix show.

“Locked up and neglected. They’re your nieces — daughters of your favorite brother,” Princess Margaret (Helena Bonham-Carter) shouts at the Queen Mother (Marion Bailey) in a tense scene after discovering her cousin’s plight.

“It’s wicked and it’s cold-hearted and it’s cruel and it’s entirely in keeping with the ruthlessness, which I myself have experienced in this family,” she adds.

“Darwin had nothing on you lot — shame on all of you.”

In response, the Queen Mother tells Margaret, “Don’t be so naive. We had no choice.”

Nerissa and Katherine were first admitted to the Royal Earlswood Hospital in Surrey, England in 1941, along with three cousins who were also related to the Queen by marriage – Idonea, Ethelreda and Rosemary Fane.

The large Victorian facility was opened by Prince Albert in April 1855 to provide a combination of education and care “to prepare (patients), as far as possible, for the duties and enjoyments of life.”

While local rumors swirled about the existence of the sisters, it was not until a 1987 story in The Sun that the wider public learned about Nerissa and Katherine's fate.

In 2011 a Channel 4 documentary, The Queen’s Hidden Cousins, opened the lid further, reporting Nerissa’s medical records as saying, "She makes unintelligible noises all the time... Very affectionate… can say a few babyish words."

Despite this, neither Nerissa nor Katherine entirely forgot their royal roots.

"If the Queen or Queen Mum were ever on television, they’d curtsey – very regal, very low. Obviously, there was some sort of memory,” nurse Onelle Braithwaite told the documentary.

“It was so sad. Just think of the life they might have had," she added. "They were two lovely sisters. They didn’t have any speech but they’d point and make noises, and when you knew them, you could understand what they were trying to say.

"Today they’d probably be given speech therapy and they’d communicate much better. They understood more than you’d think."

Former ward sister Dot Penfold added, “They were no problem to look after but they were mischievous, like naughty children."

“Katherine was a scallywag," she continued. "You could scream at her and she’d turn a deaf ear.”

The Crown alludes to this continued royal connection by showing the two sisters excitedly staring at the TV as the Queen (Olive Colman) arrives at the Royal Variety Performance in London.

Nerissa and Katherine then proudly salute the national anthem before taking some medication handed by a nurse.

While it's not known if this event actually happened in the hospital, it is known that Nerissa passed away on Jan. 22, 1986, aged 66, having spent more than 40 years in the care of its medical staff.

She was buried in a humble plot in Redhill, Surrey, with her grave marked by a six-inch plastic marker reading simply “M11125 Bowes-Lyon.” Only hospital staff attended the ceremony.

Katherine died 28 years later on Feb. 23, 2014, having relocated to a Surrey care home following the closure of the Royal Earlswood in 1997, which has now been converted into luxury apartments.

Aged 87 when she passed, Katherine also rests in Redhill, alongside her sister and their cousins Idonea, Ethelreda and Rosemary.

While the 2011 documentary stated that "there is no known record" of the sisters ever being visited by a member of the royal family, a source close to Buckingham Palace told The Mirror in 2012 that the Queen was "very upset" by the tone of the film, adding that "Both Katherine and Nerissa were visited very regularly.”

Shortly after the story first came to light in 1987, the sister's niece Lady Elizabeth Anson also told the BBC that “there was no attempt at a cover-up” and that many of her family had visited the sisters at the hospital, according to the Los Angeles Times.

Anson went on to attribute the incorrect listing in Burke’s Peerage to Nerissa and Katherine's mother, Fenella Bowes-Lyon, who she described as “a very vague person who often didn’t fill out the forms that Burke’s Peerage sent her, either properly or completely.”

In 2014, Anson also told The Telegraph that the British monarch had been “hurt” by the documentary's depiction of the royal family as uncaring.

She then described the film as “an intrusion of privacy” that was “capitalizing on the royal connection and ignoring the facts, as the sisters have always been looked after by that family."

An earlier, 1987 Buckingham Palace statement, said simply: “We have no comment about it at all. It is a matter for the Bowes-Lyon family.” 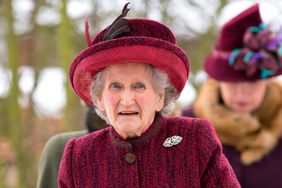