Strawberries, Hats & Champagne! Everything You Need to Know About England's Glamorous Social Season

From tea parties to bedtime stories, Prince William and Princess Kate are embracing sweet time at home with their two children. Subscribe now for an inside look at country life with George and Charlotte!

Monday marks a special day for many of England’s well-heeled party people – it’s the opening of the Chelsea Flower Show and also the unofficial beginning to the high social season (known simply as “the Season”) in and around London.

While not everyone can score a spot on the prestigious guest lists at many of these events, it’s still a fun time for royal watchers as many of these parties feature special appearances by the blue-blood set. If you’re feeling overwhelmed, don’t fret – we’ve got a handy guide to the Season to make even the biggest social-scene neophyte feel like a true insider.

The Chelsea Flower Show, which is organized by the Royal Horticultural Society at the Royal Hospital in London, is considered by many to be the sign that the modern social season has officially begun. Senior royal family members often make an appearance, including Queen Elizabeth II, Prince Charles, Prince William and Prince Harry.

Season events tend to be a mix of royal pomp, sports and parties. Aside from the Chelsea Flower Show, highlights include Wimbledon (where tennis fan Princess Kate can often be seen in the stands), the Cartier Queen’s Cup at the Guards Polo club (where Prince Harry and Prince William often pay in charity matches), Henley Royal Regatta, Trooping the Colour and Royal Ascot. The queen also hosts four garden parties at Buckingham Palace throughout the Season.

Today, the Season is mostly just an excuse to enjoy outdoor activities while sipping champagne and hobnobbing with socialites, but it has historical meaning for the British aristocracy.

Traditionally, the season marked the time when the landed gentry – who considered their country estates to be their formal homes – would flock to London to socialize and take part in politics. The Season used to run from the Opening of Parliament (which used to take place in November or December) through midsummer, allowing members of the House of Lords to make law in the city while also attending important social events.

However, now that the Opening of Parliament begins in May or June, the Season has taken to exclusively mark spring and early summer events. Debrett’s, the ultimate authority on British etiquette, considers the traditional season to run from spring through August.

The Season also used to coincide with debutantes being presented at court, which the current queen abolished in 1955. Before it was canceled, it was considered a major social no-no for a well-born young woman to take part in Season activities if she hadn’t been properly presented.

If you haven’t noticed by now, the English upper classes love a good hat, and the Season is the perfect excuse to show off creative headwear. The best place to go hat-watching has to be Ascot, where women are all required to wear hats in order to gain entrance into the prestigious Royal Enclosure. (And not just any hat: they must have a base of at least 4 inches in diameter, and fascinators are not permitted.)

What to Eat (and Drink)

As for food, the Season is synonymous with three things: strawberries, cream and champagne! However, the menu isn’t just limited to those summer favorites – Pimm’s cup, a mixture of Pimm’s No. 1, English lemonade or lemon-lime soda and a garnish of mint, cucumber, strawberry and apple, is the official cocktail of Wimbledon, and other popular English summer fare includes sprigs of asparagus and slices of smoked salmon.

Most important, especially when dealing with an outdoor event, the food items need to be bite-size and easy to eat, and the drinks need to be heavy on bubbles.

How You Know It’s Over

The Season officially ends when the queen heads off to Balmoral, the royal family’s Scottish residence, for her annual summer vacation.

For much more on life with Prince George and Princess Charlotte, pick up this week’s issue of PEOPLE, on newsstands Friday 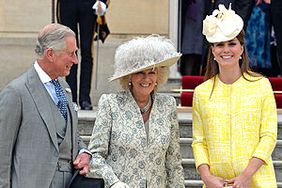 Royals Fans, Hold Onto Your Hats! 5 Things to Know about the Glam Social Season — from a Society Expert!