Spencer Matthews went to buy a watch from the luxury Hour House store in London, only for it to be attacked by armed robbers

When Spencer Matthews — the younger brother of Pippa Middleton’s husband, James Matthews — went watch shopping in London on Tuesday, he got far more than he bargained for.

“So, I just had to hide in a safe, or more like a vault downstairs,” the former Made in Chelsea star posted on Instagram, shortly after a gang of crooks smashed their way into the luxury Hour House watch store in Marylebone carrying “huge jackhammers.”

A clearly shocked Matthews added, “I was in there picking up this vintage piece that I’ve been waiting for, for ages and these guys drive a scooter through the glass and start battering the shop with hammers, with huge hammers, wearing helmets.”

He continued, “We’re in the back of the shop looking at them, sprint downstairs (and) hide in the vault until all the noise passes.”

Matthews — who welcomed a son with model wife Vogue Williams in October — described the robbed store as “just battered. I mean gonzo. All the watches gone.”

His images reveal a scene of broken glass, empty display cabinets and splintered wood, with the crooks having discarded a sledgehammer and scooter in their rush to make a clean getaway.

Thankfully, they appear to have failed: A Scotland Yard spokesperson has confirmed to PEOPLE that three men have been arrested on suspicion of armed robbery “following reports that men armed with weapons drove to the premises on mopeds and smashed a window before stealing goods and fleeing.”

The spokesperson added that “specialist firearms colleagues” attended the scene, while “a member of the public, aged in his 30s, was treated for a minor injury; this has been assessed as non-life threatening or life-changing.”

Amazingly, the day also had one more huge surprise in store for Matthews too: This time a far happier one.

Walking around the devastated shop, the reality star — who enjoyed a New Year’s vacation in St. Barts with Kate Middleton‘s younger brother, James Middleton — said it suddenly occurred to him that the vintage timepiece he’d hoped to buy (reportedly a $40,000, 1991 Rolex Daytona Zenith) had “just been nicked” and that he would somehow have to find another one.

It was then that he noticed something on the floor.

“Amongst all the rubble and all the glass and stuff there’s one watch in the entire shop and it’s mine,” said Matthews. “Now, if that’s not luck, I don’t know what is!” 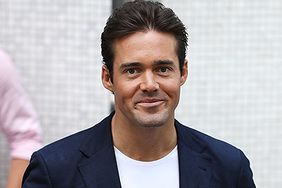