Oops! Did Serena Williams Accidentally Reveal if Meghan Markle Is Having a Boy or Girl?

Serena Williams may have accidentally hinted that her pal Meghan Markle will soon welcome a baby girl — and now U.K. bookies are taking notice.

When asked about advice she had for fellow parents, the tennis star told E! News, “Accept mistakes and don’t expect to be perfect. We put so much pressure on ourselves.”

She then added, “My friend is pregnant, and she was like, ‘My kid’s gonna do this,’ [and] I just looked at her like, ‘No, she’s not. No, you’re not. She was like, ‘I need to talk to you about tips,’ because, yes, I had all of those high expectations.”

Could Meghan be that pregnant pal – and did Williams slip that the baby is a she? (Of course, Meghan previously said that they didn’t know if they were having a boy or girl, adding that she and Prince Harry wanted it to be a surprise.)

Though it may have been an innocent mistake by the star athlete, online gambling company Ladbrokes have slashed the odds of Meghan giving birth to a girl following the apparent slip, cutting the odds from 8/13 to 4/7.

“Royal punters are looking for any slip-ups and Serena might just have given them one. We’re taking no chances and have slashed odds on a girl as a result,” spokesperson Alex Apati said.

Williams, who stars in a new commercial for Pampers’ Cruisers 360 FIT diapers alongside her 19-month-old daughter Alexis Olympia, is passing on the perks from her new partnership to the royal mom-to-be.

“I may have already sent Pampers across the pond,” she told Reuters.

The supply of diapers will definitely be useful, but Williams doesn’t think the Duchess of Sussex will need much help as a new parent.

“She’ll be the best mom, for sure,” the athlete told E! News.

The two women first met at the Super Bowl in 2010 and immediately hit it off. They also appeared together at the 2014 Super Bowl, competing in DIRECTV’s Celebrity Beach Bowl.

Williams attended Meghan and Harry’s royal wedding last May and played a big role in planning the mom-to-be’s baby shower in New York City in February. The tennis star even snapped a selfie inside The Mark Hotel, where the bash was held. The hotel is known for its black and white striped floors, which are prominent in Williams’ snaps, along with a robe featuring the hot spot’s logo.

Guests at the shower – which was also attended by Amal Clooney, Serena Williams, Gayle King, Jessica Mulroney, Misha Nonoo and Abigail Spencer – were treated to a flower-arranging class and plenty of delicious food.

“It was exactly what she needed, and it was a reunion for all of us, too, who hadn’t seen each other since the wedding,” Meghan’s longtime friend and wedding makeup artist Daniel Martin told PEOPLE.

“Snow was falling outside, and it was so cozy — we all sat on couches or on the floor and told stories and caught up,” he adds. “It was like going to a family reunion.”

Adds another attendee: “It was all baby talk. She was getting tons of advice.” 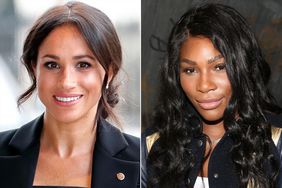 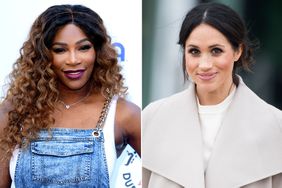 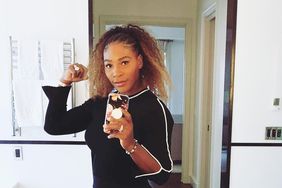 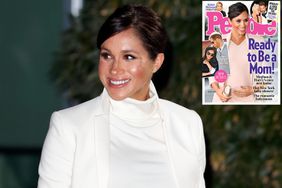 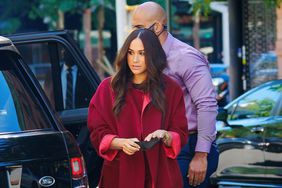