Kate Middleton and Prince William just welcomed their third child — and there's a party outside St. Mary's Hospital to celebrate

Just as he always does, self-appointed "town crier," Tony Appleton, announces the news of the baby's birth. He was present at George and Charlotte's births as well.

Fans John Loughrey and Terry Hutt may not be able to give the royal baby a kiss, so they'll use a doll as a substitute.

Loughrey shows off the royal pins on his hat.

Artist Kaya Mar brings his biblical-inspired painting to the Lindo Wing — and it includes the royal family dog, Lupo.

It's celebration time outside the Lindo Wing when the baby's arrival is announced.

Fans — decked out in Union Jack print — camped out for days ahead of baby number three's arrival.

It may be royal baby day — but it's also this little baby's debut day, too! An unsuspecting couple was greeted by cameras when leaving the Lindo Wing on Monday morning.

And another couple gets a moment in the spotlight while leaving the Lindo Wing!

There were Union Jacks everywhere outside the hospital.

Hutt, 82 has been a fan of the royal family for decades, and has been waiting outside the hospital for 15 days. "I’m been covering these events for decades and I wouldn’t miss it for the world," he tells PEOPLE. “I’ve ordered fish and chips for 10 and we have already had some lovely champagne to celebrate the baby!”

Hutt shows off his spirited outfit and posters.

Never too early for a celebratory drink! Fans cheers after the announcement of the royal birth.

People gather with their cell phones to snap photos of the excitement. 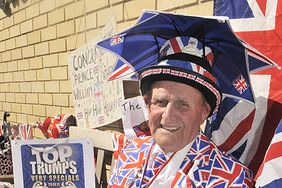 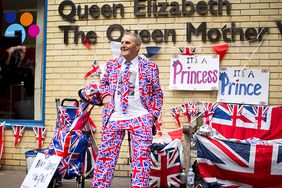 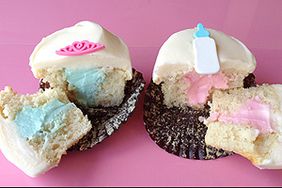