Prince Harry couldn't help but gush over his bride Meghan Markle, who wore a custom Givenchy gown, during their wedding ceremony on Saturday

While viewers got to see inside Prince Harry and Meghan Markle‘s wedding ceremony, fans watching from home couldn’t hear all the touching exchanges between the couple that went down during the service.

When Prince Harry’s dad Prince Charles walked Markle down the aisle after her own dad Thomas was unable to make it to the U.K., Harry kindly said, “Thank you, Pa,” once his bride had entered St. George’s Chapel.

Then, when he was united with Markle, 36, at the altar, Prince Harry said to the Suits star, “You look amazing. I’m so lucky.”

Markle wore a silk gown designed by Clare Waight Keller for Givenchy featuring an open bateau neckline and sculpted waist. The train flowed in soft round folds cushioned by an underskirt in triple silk organza. The actress topped her look with an elegant updo accessorized with the Queen Mary Diamond Bandeau featuring a trim of hand-embroidered flowers from each of the 53 counties in the Commonwealth in threads and organza. The veil flowed for 16 feet.

The pair exchanged glances throughout the ceremony, which included a sermon from Chicago-based Bishop Michael Bruce Curry, a gospel choir singing “Stand By Me” and celebrity guests like Priyanka Chopra, Amal and George Clooney and Serena Williams.

When it came time for Harry and Markle to exchange vows, the prince accidentally swapped “I do” and said “I will” instead. His bride supported him and said the same.

Their big day continued with a carriage ride around Windsor, a lunch reception at St. George’s Hall at Windsor Castle — where Elton John performed — and wraps with a smaller party of about 250 guests hosted at Frogmore House. 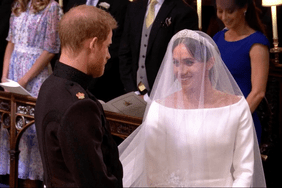 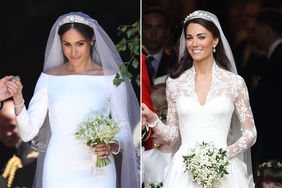 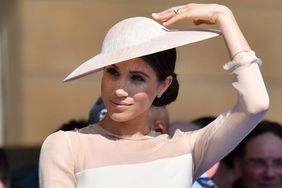 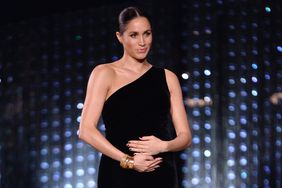 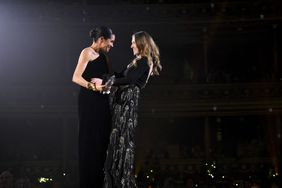 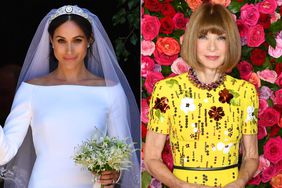