Prince George was born on a full moon, and history could repeat itself for Baby No. 2

While Princess Kate‘s baby seems to be in no rush to arrive, the moon may tell a different story – if you listen to royal astrologer Penny Thornton.

“There are a lot of babies born on a full moon,” Thornton – former astrologer to Princess Diana – tells PEOPLE. “It s believed that because we are 90 percent water the gravitational pull of the moon on the tides and the oceans has the same effect on our bodies in labor.”

That means that Kate s much-anticipated second child could arrive on Monday, May 4, when the full moon will rise at 4:42 a.m. (GMT). The new baby would be following the lead of big brother Prince George, who was also born under a full moon in 2013.

However, any evidence that the lunar cycle impacts labor is only anecdotal, according to birthing experts. “I m not aware of much evidence, but it is something that more traditional midwifery societies and some doulas say that they experience,” Doula UK spokesperson Lindsey Middlemiss tells PEOPLE.

Middlemiss, a practicing doula herself, does concede that the power of the mind and the emotions of a woman due to go into labor might be just the ticket. “The hormones of birth are essentially controlled by a woman s thought process and emotions, so if Kate feels that a full moon is going to help bring on her labor, then it could quite possibly happen!” she says.

Thornton also says that the lunar calendar may affect the baby’s temperament.

“Full-moon babies are usually highly sensitive and emotional,” adds Thornton, who was the much-relied-upon astrologer to Princess Diana. The royal astrologer has also predicted that the new baby, a Taurus, will be “cautious and conservative, with a love of food, scents, flowers and beautiful things.”

The Latest from the Scene of the #GreatKateWait 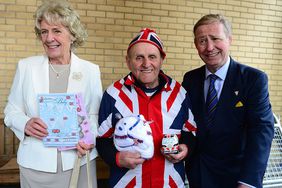