The little boy was introduced to the world just like his siblings, George and Charlotte.

The newborn royal closed his eyes for his big debut.

It was the public debut for their new son — whose name has yet to be revealed.

The little royal kept warm in a blanket during his introduction.

Like his big sister Princess Charlotte did, the new little royal wore a knit bonnet for his public debut.

Kate wore a red dress with a white collar from Jenny Packham.

The garment seemed to be a tribute to Kate's late mother-in-law, Princess Diana, who wore a red dress with a white collar when presenting her second son, Prince Harry, to the world.

The little royal even peeked his hand out to show off his very first royal wave.

The little boy's name will be announced in the next few days.

The family smiled for photos on the steps for a few minutes before heading back inside.

The parents brought their son back out in his car seat to take him home.

Prince William strapped the carseat in the back before getting in the driver's seat.

William and Kate beamed as they introduced their son to the public.

Talking to the crowds, William joked: "We didn’t keep you waiting too long!"

He also added that as a dad of three, he had "thrice worry now."

As for the baby's name? "You’ll find out soon enough."

The couple will both be taking several weeks off from royal duties to bond as a family of five.

He also said the couple is “very happy, delighted" about their new arrival.

Of course, there's an important on the horizon: Prince Harry and Meghan Markle's wedding on May 19!

The little royal wore a shawl from GH Hurt and Son Ltd, a longtime favorite brand of the royal family's.

Kate waves to the crowds as William carries their new son.

Kate shares a sweet moment with her newborn son.

The family arrived home at Kensington Palace that afternoon. 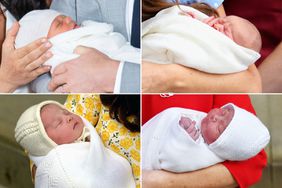 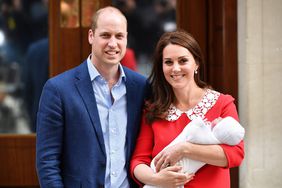