Queen Elizabeth's family members are pretty recognizable, but that doesn't mean they all go without their name tags at Royal Ascot!

While face masks were a noticeable new accessory at this year's posh horse racing event — and the hats on both ladies and gentleman always steal the show — name tags are also a traditional addition to outfits at the annual event.

Several royals attended day one of Royal Ascot on Tuesday, with many opting to wear name tags on their ensembles. Princess Anne, Prince Edward and Sophie, Countess of Wessex, all sported the green badge, which helps signal their admission into the exclusive royal box. Zara and Mike Tindall joined in as well, wearing tags that read "Mrs. Mike Tindall" and "Mike Tindall, Esq."

On the other hand, Prince Charles and Camilla, Duchess of Cornwall both went without name tags on Tuesday as they presented the trophy to the winner of day one's featured race, the St. James's Palace Stakes.

Queen Elizabeth does not wear a name tag, and other royal women have followed suit in recent years. Although Kate Middleton has worn one that read "HRH The Duchess of Cambridge" in past years, she didn't sport the accessory during her 2019 outing to the event.

Meghan Markle attended Royal Ascot in 2018 shortly after her wedding to Prince Harry. Although the Duke of Sussex wore his tag on his suit jacket, Meghan was seen carrying the pin but didn't put it on her white dress.

Queen Elizabeth, 95, missed the first day of the event — but for good reason. The monarch hosted her first in-person audience since the start of the coronavirus pandemic at Windsor Castle, meeting with Australian Prime Minister Scott Morrison.

However, it's very likely that the Queen watched the event on TV, just as she did last year during the pandemic. Not only is she a well-known horse lover, but her horse King's Lynn ran in the King's Stand Stakes! The monarch is likely to attend the event later in the week. 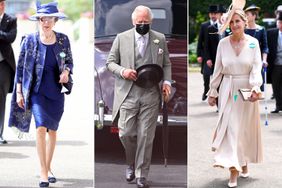 Royals Return to Royal Ascot for Day 2 of Horse Racing (and Whimsical Hats!)