Queen Rania of Jordan is starting 2019 by addressing a surprising hot topic: the cost of her clothes.

The 48-year-old royal’s office released a rare statement on Facebook in response to blogs that have shared the estimated costs of Queen Rania’s wardrobe, noting that it has been a subject of debate over the years and even eclipsed her public work.

“In recognition of Her Majesty’s interest in making the facts accessible to all to build their thoughts and opinions on them – positive or negative – we have decided to clarify some details on this subject,” the statement said.

Queen Rania’s office noted that blogs only share the retail price of clothes, which creates a “false impression of reality,” as the royal’s wardrobe is largely borrowed, received as gifts or purchased at reduced prices. The office also noted that her style choices are not promoted unless it is to highlight a Jordanian designer.

“The focus on clothing and spending wives of leaders in many countries and accusing them of wastefulness – whether right or wrong – is not new, and has been exploited as a historical political tool,” the statement continued. “Today, we see some in Jordan adopting this approach to portray Her Majesty the Queen as far from reality, far from the truth. So they may reject this clarification and question it in principle, in an effort to build a false public opinion.”

The office added, “Her Majesty is aware of the criticisms that have been circulating. I have previously emphasized that criticism is an integral part of public work and that it is with responsible criticism, respect and always takes it seriously and responds to it. Today, however, we find those who are not content with criticism, but even to the point of fabricating the information and resorting to the method of ridicule and mockery, which is unfortunate, contrary to the values ​​of our Jordanian society.”

Queen Rania’s office acknowledged the “out of the ordinary” nature of their statement but insisted on stopping the spread of unfounded rumors.

Queen Rania, who married King Abdullah in 1993, recently shared a family portrait featuring their four children with wishes for 2019.

“May we greet the New Year with gratitude for all our blessings and hope for a better tomorrow,” she captioned the shot on Instagram. 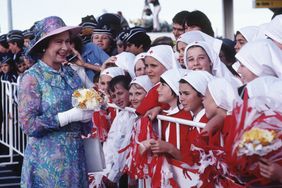 A Lifelong Supporter of Hundreds of Charities, Queen Elizabeth's Death Marks 'The End of an Era'