After 70 years together, Queen Elizabeth and Prince Philip have earned their platinum milestone

After 70 years together, Queen Elizabeth and Prince Philip have earned their platinum milestone. And they are celebrating their long-lasting marriage with a perfectly-themed photo shoot.

On Sunday — just one day after releasing their first anniversary portrait — the royal couple released a second sequence of three new photos. Only this time, they are photographed against a platinum-textured backdrop. And just like the metal, their union is strong, precious and rare.

Queen Elizabeth was just a teenager when she fell in love with the Greek-born Royal Navy officer. The couple wed in a gorgeous ceremony on November 20, 1947 at Westminster Abbey – the same place where Prince William and Kate Middleton tied the knot in 2011.

Today, the nonagenarian couple, who have the longest royal marriage in history, enjoy their favorite shared interests together: collecting wildlife art, picnics in the Scottish heather and grilling with a custom barbecue cart designed by Philip complete with velvet-lined drawers for their favorite liquor. (Gin-and-Dubonnet cocktails for her, of course.)

As they gather to mark the 70th wedding anniversary of Queen Elizabeth, 91, and Prince Philip, 96, at Windsor Castle on Nov. 20 with a private dinner, the royal family will toast the latest amazing milestone in a lifetime of records. 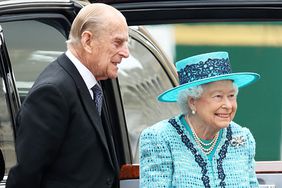