On Saturday, the Queen visited the company of the HMS Queen Elizabeth in Portsmouth

Queen Elizabeth is paying her respects.

On Saturday, the Queen visited the company of the HMS Queen Elizabeth — an aircraft carrier named by the monarch— in Portsmouth, ahead of its upcoming world tour.

During the visit, the monarch went aboard the ship, where she got a chance to meet with the officers as well as the Royal Navy, Royal Air Force and Royal Marines personnel ahead of the ship's maiden operational deployment. An additional 250 United States Marines will also be serving on the operation.

The Queen wore a matching red coat and hat for the outing as well as a brooch given to her by her late husband Prince Philip, who was a naval veteran. The monarch wore the "Scarab" brooch in yellow gold, carved ruby and diamond, which was a personal gift from Philip in 1966. She also wore the meaningful accessory in a portrait celebrating their 70th wedding anniversary in 2017.

Over the course of 28 weeks, the ship will lead the United Kingdom Carrier Strike Group on a journey of over 26,000 nautical miles, traveling from the Mediterranean to the Philippine Sea.

HMS Queen Elizabeth is one of the two largest warships ever built by the Royal Navy.

The Queen named the HMS Queen Elizabeth in July 2014, during a trip she made alongside her husband.

She was also on hand to formally commission the aircraft carrier in 2017, where she was joined by daughter Princess Anne, who wore a naval uniform (she holds some honorary positions in the Royal Navy).

"As the daughter, wife and mother of naval officers, I recognize the unique demands our nation asks of you and I will always value my special link with HMS Queen Elizabeth, her ship's company and their families," the Queen said at the time, in a nod to her husband.

Although by that time, the Duke of Edinburgh had retired, the monarch shared a warm message on his behalf.

RELATED VIDEO: Queen Elizabeth Opens Parliament with Prince Charles and Camilla by Her Side

Earlier this month, the Queen attended the State Opening of Parliament — her first official engagement outside of Windsor Castle since Philip's death.

She was accompanied by her son and heir, Prince Charles, and his wife, Camilla, Duchess of Cornwall, who arrived separately from the Queen.

A former senior aide at the palace previously told PEOPLE, "Her family will step up and be by her side, but she will carry on. She understands that she has a job to do, and [Philip] would have wanted her to crack on. She did do so when he retired from public life."

A close royal insider added, "She will never abdicate because of duty and honor and public service is so deep in her, as it was for him." 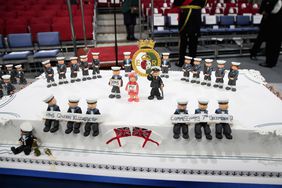 Forget Harry's Banana Cake! The Queen Can't Hide Her Amusement at This Amazing Cake of Herself