Queen Elizabeth Is a High-Stakes Horse Breeder Who Has Raked in 'How' Much at the Races?!

The Queen is not playing at this.

Horse racing may be known as the Sport of Kings, but Queen Elizabeth has made it all her own.

New statistics show that the 91-year-old Queen has raked in nearly $9 million in winnings during the last 30 years.

The Queen, who attends the Royal Ascot races every June, was given her first pony when she was 4 and won her first race as an owner in 1949 when she was a 23-year-old princess. She is still riding as often as she can.

She currently owns about 25 horses, it is believed. They are mostly stabled at the stud on the Sandringham estate in rural Norfolk. Some insiders predict that she has a hope that her horse Elector may run for her in the prestigious Derby next June.

“It means an awful lot to her. You can see it in her face when her horses are winning,” says Sean Trivass of myracing.com. “She loves every single second of it.”

The Queen’s most lucrative period was in the 1960s, but she is now “back in the game,” Trivass adds. “She’s had a good year and has some decent horses, and long may it continue.”

“She loves her horses more than her racing,” he adds, noting that about two-thirds of the Queen’s horses are home-bred. “She is a small owner-breeder. There is far more satisfaction as an owner-breeder to have seen that horse as a foal, grow up and then go to the races and then win it. She appreciates and enjoys that side of things as much as anything.”

On Tuesday, Elizabeth was joined by her eldest son, Prince Charles, 68, on a visit to the Household Cavalry Mounted Regiment — where she got to name the regiment’s new drum horse, Perseus.

Wearing a sky-blue Stewart Parvin cashmere coat decorated with two military brooches and a hat by Angela Kelly, the Queen was told how Household Cavalry drum horses carry the rank of Major and are senior to all other animals in the army.

RELATED VIDEO: Queen Elizabeth Is a High-Stakes Horse Breeder Who Has Raked in How Much at the Races?!

Perseus is set to undergo intensive training to serve as the Blues and Royals Drum Horse with the Household Cavalry Band, and is set to graduate, or “pass out,” on the Queen’s Birthday Parade next June.

Also at the stables, the monarch was introduced to Wellesley, Prince William‘s grey charger, which he rides at the Trooping the Colour.

When the the Queen was shown a young horse called Johnnie (actually a mare pronounced Joanie), she remarked, “She’s quite small” and fed her a mint. When the horse bared its teeth and curled its lip, the Queen jokingly commented, “Horrid!” (Equestrian experts say this is how horses savor the taste of the mint.)

At the Forge, the Queen met Quinn, a horse with his skeletal system painted on to his coat as a teaching tool. “It’s a very good idea,” she said, before quipping, “But does the paint come off?”

Charles, along with his brothers and sister, are likely to be accompanying the Queen more often now that Prince Philip has retired from public life. 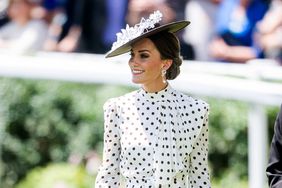 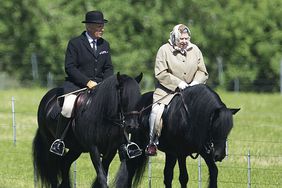