The pregnant princess looked lovely in her traditional Swedish garb, but where was husband Christopher O'Neill?

The Swedish royal family got gloriously dressed up in traditional garb over the weekend for National Sweden Day – with nine-months-pregnant Princess Madeleine swathing her bump in her homeland’s traditional colors.

While all the ladies looked lovely, the royal portrait left royal fans with one very important question: Where was Princess Madeleine’s husband?

Royal watchers say Christopher O’Neill’s absence from the photo doesn’t signal trouble for the couple, who celebrate their second wedding anniversary today. The princess even took to her official Facebook page to commemorate the event.

The press-shy British-American businessman, who turned down a royal title after marrying Madeleine, isn’t always able to accompany his wife on appearances “simply because he is a professional and working elsewhere, often abroad, as a banker,” Johanna Lejon, royals reporter at Svensk Damtidning, tells PEOPLE.

O’Neill, who used to be based in New York, often travels to London, where Madeleine, their 15-month old daughter Princess Leonore and their upcoming arrival will join him in the fall so he can be closer to his work.

“Madeleine has lived in London before, when she was 18, and loved the city because she could be so anonymous there,” Lejon adds.

The couple made headlines last year when they moved back to Sweden after spending four years in New York.

It turns out that Stockholm was simply a stop on the way, reporter and royal expert Jenny Alexandersson of Aftonbladet tells PEOPLE. Chris moved to London first, and Madeleine and their children will follow shortly. It is obvious that Chris did not enjoy Sweden. Moving from New York to Stockholm was a shock for him, I think.

O’Neill’s work is a big part of his life – a fact that was made evident when he turned down the prince title that was offered to him by Madeleine’s father, King Carl XVI Gustaf. According to Lejon, O’Neill couldn’t continue to work in finance if he had a royal title.

The pregnant princess, 32, is due any day now, which means she might miss the lavish wedding of her older brother, Prince Carl Philip to Sofia Hellqvist on June 13.

The 36-year-old prince is set to tie the knot in a ceremony in the palace’s royal chapel in Stockholm.

And although Sofia couldn t wear the traditional white folded cap in that eye-catching family photo, which signals that she is not yet married, maybe she’s been inspired by Madeleine’s gorgeous wedding day look when it comes to choosing a princess-worthy tiara for her big day!

• With reporting by Ulla Plon 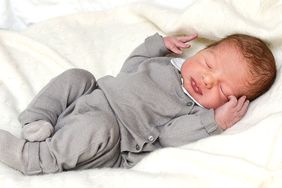 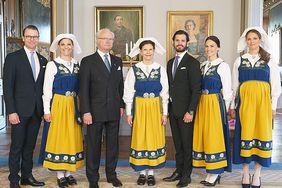