Princess Eugenie chose an iconic American author for her traditional British royal wedding, but that isn't the only surprise!

In addition to serving as her sister’s maid of honor on her wedding day, Princess Beatrice gave a special reading during Princess Eugenie‘s royal wedding to Jack Brooksbank on Friday.

After Jack’s cousin, Charles Brooksbank, finishes his reading — taken from St. Paul’s Letter to the Colossians — Beatrice stood before the gathered wedding guests at St. George’s Chapel in Windsor Castle to read a passage from The Great Gatsby by F. Scott Fitzgerald.

The fact that the princess bride chose an iconic American author for her traditional British royal wedding isn’t the only surprise, considering that The Great Gatsby is a dark novel that is less of a love story and more of a reflection of the disillusionment of the American Dream.

Eugenie selected one of the book’s most famous passages for her sister’s reading, which describes the title character, Jay Gatsby’s smile.

“He smiled understandingly-much more than understandingly. It was one of those rare smiles with a quality of eternal reassurance in it, that you may come across four or five times in life. It faced–or seemed to face–the whole eternal world for an instant, and then concentrated on you with an irresistible prejudice in your favor. It understood you just as far as you wanted to be understood, believed in you as you would like to believe in yourself, and assured you that it had precisely the impression of you that, at your best, you hoped to convey.

“Precisely at that point it vanished — and I was looking at an elegant young rough-neck, a year or two over thirty, whose elaborate formality of speech just missed being absurd. Some time before he introduced himself I’d got a strong impression that he was picking his words with care.”

The quotation actually mirrors the royal’s own sentiments about her future husband. Just as Gatsby has the ability to make people feel important, Eugenie says Jack embodies that same quality.

“Jack’s the kind of guy, you know when you’re lost at a party and you can’t find anyone to talk to, and you start panicking and you need help? He’ll walk in and make everyone feel so special,” Eugenie said during her pre-wedding interview with ITV.

Their wedding officiant, the Dean of Windsor, the Rt Rev David Conner, reiterated that thought during the service, when he revealed that Eugenie had been reading the book when she first started dating Jack.

“The words that particularly reminded her of Jack concern Gatsby’s smile. As we heard from the reading, ‘It was one of those rare smiles with a quality of eternal reassurance in it . . . It concentrated on you with an irresistible prejudice in your favor,’ ” he said.

“Well a few years have passed, and Eugenie and Jack come here today to smile on each other, and to offer each other something like ‘eternal reassurance’ and the promise of an ‘irresistible prejudice’ in each other’s favor.”

Of course, Gatsby didn’t get the same fairy tale ending as Jack! After falling hopelessly in love with the married Daisy Buchanan, it’s revealed that Gatsby built his fortune on corruption, and he’s ultimately murdered by a man who believed he was having an affair with his wife.

The 1925 Jazz Age novel was given new life with the 2013 onscreen adaptation starring Leonardo DiCaprio, which inspired a growing trend of Gatsby-themed parties. And now, Eugenie’s royal wedding may just inspire a whole new generation of royal fans to pick up the American classic. 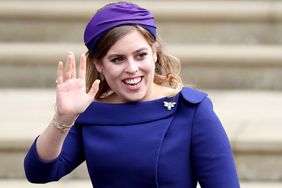