Princess Diana's Brother on His Wrenching Eulogy: 'I Was Out of Oxygen' — and on Protecting Her Sons

"I had to punch each syllable out of the base of my stomach," he tells PEOPLE

When Princess Diana‘s brother stood at the pulpit of Westminster Abbey for her funeral on September 6, 1997, he faced a daunting responsibility.

Speaking as “the representative of a family in grief, in a country in mourning, before a world in shock,” as Charles, 9th Earl Spencer put it before the gathered mourners and the millions more watching on television, he used the occasion to both pay tribute to his sister as the “very essence of compassion, of duty, of style, of beauty” — and to condemn the treatment she’d faced from the tabloid media.

Noting the irony of his sister’s namesake as the goddess of hunting — in the eulogy’s most iconic line, he described Diana as “the most hunted person of the modern age” — “summed up so much of the anger I felt toward those who had done that to her,” Spencer, 55, previously told PEOPLE.

He also turned protector of her young sons, Prince William and Prince Harry. “She’d left me as guardian,” he noted. During his eulogy, “I was looking directly at William and Harry across her coffin. In the final paragraph I had run out of energy, almost out of oxygen. I had to punch each syllable out of the base of my stomach.”

Last year, Spencer shared a previously unseen childhood photo of him and Diana at ages 3 and 5. The image, taken in 1967, appeared in a limited-edition, leather-bound version of the eulogy. All the proceeds from the 100 numbered books went to various charities, including Whole Child International, the nonprofit founded and run by Spencer’s wife, Karen, to support improving the quality of care in orphanages and child-care centers in developing countries.

During an interview with BBC Radio 4’s Today last year, Spencer shared more heartbreaking memories from Diana’s funeral. He talked about the role that Harry and William played on that day, saying that it was “bizarre and cruel” to make them walk behind the coffin and that he had tried to get the palace to drop the idea but was “lied to and told that they wanted to do it, which of course they didn’t.”

“It was the most horrifying half an hour of my life,” he said. “It was just ghastly. And it was far worse than having to deliver a speech at the end of it. It was the worst part of the day by a considerable margin, walking behind, well, my sister’s body, with two boys who were obviously massively grieving their mother. And it was this sort of bizarre circumstance where we told you had to look straight ahead. But the feeling, the sort of crashing tidal wave of grief coming at you as you went down this sort of tunnel of deep emotion, it was really harrowing actually and I still have nightmares about it now.”

Spencer also recalls that after Diana’s 1996 divorce from Prince Charles, she sought to blaze a new path. But the reality was more complicated than she’d hoped.

“Diana had a lovely dream that she could live a normal life afterward,” Spencer said. “But the one house that she set her heart on in the park [at the family home of Althorp] was three bedrooms and 100 yards from the road. And it was just not possible. The police knew it wouldn’t work. I offered every other property that was suitable on the estate. I really felt it was the right decision for her. But she probably couldn’t see it.” 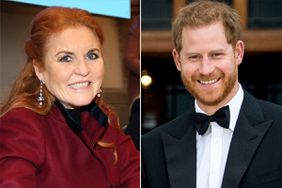