Princess Diana has been honored with a statue at Kensington Palace — and her special bond with children is on full display.

The royal's sons Prince Harry and Prince William reunited on Thursday, which would have been Diana's 60th birthday, for the statue unveiling. Together, the brothers pulled a green cloth off to reveal the sculpture of Princess Diana with her arms around a boy and a girl, with a third child in the background.

The decision to include children in the tribute pay homage to Princess Diana's special ability to bond with people, particularly young ones. She worked closely with many children-focused charities, including children's hospitals and support for homeless youth. The Diana Award charity, started in her honor, also works to develop and inspire positive change in the lives of young people.

Kensington Palace said Diana had "gained confidence in her role as an ambassador for humanitarian causes" and the statue "aims to convey her character and compassion."

"The statue aims to reflect the warmth, elegance and energy of Diana, Princess of Wales, in addition to her work and the impact she had on so many people," the palace said. "The figure of Diana, Princess of Wales is surrounded by three children who represent the universality and generational impact of The Princess' work. The portrait and style of dress was based on the final period of her life as she gained confidence in her role as an ambassador for humanitarian causes and aims to convey her character and compassion."

While royals often wore hats and gloves at events, Diana opted not to during public outings and engagements.

"She abandoned the royal protocol of wearing gloves because she liked to hold hands when visiting people or shake hands and have direct contact," Eleri Lynn, the curator of an exhibit on Diana's style, previously told PEOPLE. "She also stopped wearing hats because she said, 'You can't cuddle a child in a hat.' "

Prince William, 39, and Prince Harry, 36, shared a statement on what would have been Diana's 60th birthday.

"Today, on what would have been our Mother's 60th birthday, we remember her love, strength and character — qualities that made her a force for good around the world, changing countless lives for the better."

The statement continued, "Every day, we wish she were still with us, and our hope is that this statue will be seen forever as a symbol of her life and her legacy."

Listen below to our daily podcast PEOPLE Every Day for more on Prince William and Prince Harry's reunion for the unveiling of the statue honoring their mother, Princess Diana.

Thanking their associates in bringing the statue and the garden to life, they also expressed their appreciation for "all those around the world who keep our mother's memory alive."

Plans for the Princess Diana statue were first announced in February 2017, the year of many commemorations of Diana's life, as it marked 20 years since she died in a car crash in Paris at age 36.

Thursday's event was scaled back due to ongoing COVID restrictions in the U.K. The brothers will be joined by close family members of Princess Diana, statue committee members, the statue's sculptor Ian Rank-Broadley and Pip Morrison, the designer of the Sunken Garden at Kensington Palace. 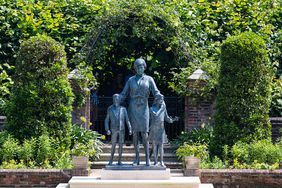