Prince Harry has remained close with both of his late mother's sisters, and his aunts were also in attendance at his 2018 nuptials

Prince Harry made sure his late mother’s family was present for his son’s christening!

Lady Sarah, who is the eldest of the Spencer children, wore a light pink outfit with a matching hat, while Lady Jane opted for a yellow and black ensemble.

The intimate gathering was attended by around 25 close family members and friends, which also included Prince Charles and wife Camilla, Duchess of Cornwall as well as William’s wife Kate Middleton.

“The Duke and Duchess of Sussex are so happy to share the joy of this day with members of the public who have been incredibly supportive since the birth of their son. They thank you for your kindness in welcoming their first born and celebrating this special moment,” they captioned a sweet Instagram post. “Their Royal Highnesses feel fortunate to have enjoyed this day with family and the godparents of Archie.”

Both of Diana’s sisters were also in attendance at Harry and Meghan’s 2018 wedding, arriving with their brother, Charles, the current Earl of Spencer.

“Prince Harry and Ms. Markle both feel honored that Lady Jane will be representing her family and helping to celebrate the memory of the late Princess on the wedding day,” Kensington Palace announced in a statement at the time.

All of the siblings played prominent roles in the royal couple’s nuptials, with Lady Jane giving a reading during the service.

Diana was four and six years younger than Jane and Sarah, respectively.

Lady Sarah is perhaps remembered as the woman who introduced Diana to her future husband Charles, having briefly dated the royal first.

Meghan and Harry chose to have their son’s christening at Windsor Castle because they “wanted an intimate, peaceful setting in a place with such a special connection to Her Majesty,” a royal source told PEOPLE.

Additionally, the Duke and Duchess of Sussex did not have to travel far from their Frogmore Cottage home, as it’s on the grounds of Windsor Castle.

“This is a beautiful milestone and they are excited to share it as a family first and then with the world,” said the source of Harry and Meghan, who wore a white Dior dress to her son’s christening. 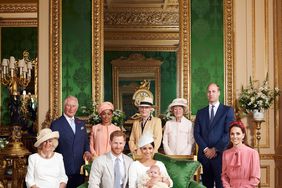