Princess Charlotte Is the Queen's Mini-Me in Her New School Photos!

Princess Charlotte is twinning with her great-grandmother!

Princess Charlotte is twinning with her great-grandmother!

At 2 years old, the little royal is already giving us major Queen Elizabeth vibes. With the release of her new school photos on Monday, it’s clear that the littlest royal is taking after her great-grandmother — right down to their hairstyles!

From their captivating gazes to their matching royal hair part, Charlotte has inherited the very best of the 91-year-old monarch.

It’s all in the eyes

Charlotte and her great-grandmother share the same striking eye structure – from their matching blue eyes to the arch of their eyebrows, there’s no questioning their resemblance.

Heir to the hair

While big brother Prince George sports adorable blonde locks (with the perfect side-part!), Charlotte has lovely light brown hair. Before her hair turned a regal shade of white, Queen Elizabeth’s hair was a very similar shade to her great-granddaughter’s.

The royal relatives both share a love of pink. Kate Middleton recently revealed that it’s her daughter’s favorite color. She has worn lots of pink dresses during royal outings. The Queen is also often spotted wearing bright pink ensembles while performing her many public duties.

For the love of cardigans

The little princess and the reigning monarch also share an appreciation for cardigans. Both wore matching pink sweaters for the Queen’s family portrait ahead of her 90th birthday in 2016.

It’s clear Charlotte already has a deep love for animals. She couldn’t get enough of a fluffy rabbit during a memorable playdate in Canada last September — and she wouldn’t leave the side of one very large dog named Mouse.

And she’s a budding equestrian! While attending an event to meet and honor British Olympians at Buckingham Palace in October 2016, Princess Kate revealed that Charlotte already has developed a love of horses — just like great-grandmother, Queen Elizabeth.

Queen Elizabeth has a longtime love of dogs – her fondness for corgis is legendary. And at 91, she still takes her beloved horses out for routine rides around the palace grounds. 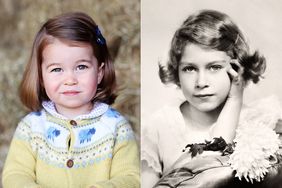 Proof That Princess Charlotte Is the Queen's Ultimate Mini-Me 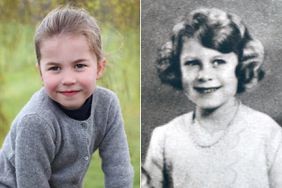 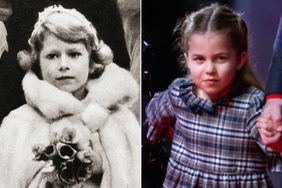