Princess Charlene spent most of the last 10 months away from home following a series of medical procedures intended to correct a previous ENT surgery. The royal was in South Africa, her home country, from May 2021 to November, briefly returning to Monaco before entering a Swiss care clinic to continue recovering

Princess Charlene wished friends and followers a Merry Christmas in 2020 with a carousel of celebratory candids featuring her husband Prince Albert and their young twins Prince Jacques and Princess Gabriella.

The royal also gave fans another glimpse of her edgy new hairstyle, a "half hawk," with which she'd surprised onlookers at a Christmas gift event a week before.

The former Olympic swimmer, who grew up in South Africa and competed for her country at the 2000 Summer Olympics, paid her respects at the memorial for King Goodwill Zwelithini in March 2021. The king of the Zulu nation died that month, and the memorial was held at the royal palace in Nongoma.

The princess posted a relaxed family photo ahead of the Easter weekend in April 2021, showing Prince Jacques and Princess Gabriella smiling for the camera while painting eggs with their mom and dad.

Back to South Africa

In May, Princess Charlene (pictured here at a different event) left Monaco to support her South Africa Foundation's work in wildlife protection. The royal met with an anti-poaching unit in the field and offered her thanks "for keeping our wildlife and rhinos safe."

While abroad, the mother of two underwent surgery after her sinus lift and bone graft (performed prior to her May arrival in South Africa) became infected. Her health issues were cited when her appearance at the Monaco Grand Prix on May 21 was abruptly canceled.

Later in the summer, Charlene would reveal that the serious ENT infection wouldn't allow her inner pressure to "equalize," meaning she couldn't fly above 20,000 feet for several months — including home to Monaco.

Visit from Her Husband and Kids

Prince Albert visited his wife with their two children in early June, reuniting at a private game reserve in the country's Kwazulu Natal district. Charlene posted a photo from the long-awaited reunion and captioned it simply with a heart.

In late June, Charlene (pictured in Monaco prior to last year) underwent a second corrective surgery to address the continued pain she was experiencing, which turned out to be the severe ear, nose and throat ailment. The June 23 procedure delayed her scheduled return to Monaco, ahead of her 10th wedding anniversary on July 1.

"My daily conversations with Albert and my children help me keep my spirits up a lot, but I miss their presence very much," she told PEOPLE in a statement. "I can't wait for us to be together."

Speaking to South Africa Radio 702 during her anniversary month, the royal said she hoped to leave South Africa around the end of October, after another medical procedure amid the frustrating "waiting game."

On the road to recovery, the princess said her spirits were always brightened by chats with her family.

"Spending time with Jacqui and Bella
making blankets for the crèche next door. Wish me luck 😂🙏" Charlene captioned a series of Instagram photos in July, showing her FaceTiming her twins while working on a service project.

In another photo, she panned the phone camera while standing before conservation posters that read "SAVE OUR ELEPHANTS" and "SAVE THE RHINO," presumably teaching her twins about the importance of wildlife protection.

In August 2021, Charlene promoted rhinoceros conservation with a bold photo shoot and joyfully reunited with her husband and twins in South Africa following a major corrective surgery for her ongoing issues.

"I am so thrilled to have my family back with me," she wrote of a photo with Albert, Jacques and Gabriella during the family's vacation to a safari resort in the Kwa-Zulu Natal region.

During their time apart, the princess teased that her daughter "decided to give herself a haircut!!!" and explained she did her best to correct the 6-year-old's handiwork.

"Sorry my Bella I tried my best to fix it," she joked of the trim on Instagram.

A Small Bump in the Road

Speaking with PEOPLE after visiting Charlene in South Africa, Prince Albert said his spouse was "eager" to head home after nearly four months away and voiced his hopes that it would maybe even be able to happen sooner than initially expected.

"She's ready to come home," the royal told PEOPLE. He noted that the return date "depends on what her doctors say," and if her progress continued, Charlene could plan to travel as soon as September.

However on Sept. 1, the princess was hospitalized in South Africa "due to complications from a serious ENT infection," the palace said in a statement to PEOPLE.

"Her Highness is being closely followed by her medical team, who say her condition is reassuring," the official statement said.

On Oct. 3, Charlene appeared to be in good spirits as she posted a smiling photo on Instagram captioned, "God Bless ❤"

A few days later, Albert told a Monaco radio station his wife was on the mend despite her "complicated" path to recovery. He also gave an update that she would be checking in with doctors "in a few days."

On Oct. 8, the palace confirmed to PEOPLE the princess had visited the hospital for what was expected to be a "final procedure" before she could return home to Monaco.

Sharing a snippet from an interview on her Instagram a few days later, Charlene opened up about missing her children "terribly" and said she couldn't wait to see them again. Fortunately, the wait wouldn't be much longer.

On Nov. 8, the princess touched down in France, sources told PEOPLE. There, she was greeted by her husband and twins – who presented her with a large bouquet of flowers – before the four helicoptered on to Monaco.

After her six-month stay in South Africa, Charlene didn't come home empty-handed, either. Amid their reunion, a local newspaper reported that she also introduced loved ones to the newest member of their royal family: a Rhodesian Ridgeback puppy named Khan!

Days after making her highly anticipated return, Charlene canceled her appearance at Monaco's National Day and announced her "temporary" withdrawal from public activities. Said to be in a "state of profound fatigue," the palace told PEOPLE that she and her husband decided the pause was necessary in the best interests of her health.

"Having battled with poor health over the past few months, the Princess is currently convalescing and will continue to do so for the coming weeks, allowing her time to recover from a state of profound general fatigue," the palace said in a statement.

On Nov. 19, Prince Albert exclusively told PEOPLE that his wife was receiving treatment in a facility "outside of Monaco."

The sovereign prince said that Charlene was suffering profound "exhaustion, both emotional and physical," and that the decision was made in part with her brothers. Dismissing a variety of rumors, Albert said her recovery would require clinical care lasting at least several weeks.

Despite the distance, Prince Jacques and Princess Gabriella had their mom on their mind. At Monaco's National Day Nov. 19, the young royals displayed homemade signs showing support for Charlene during the royal family's traditional balcony wave from the palace.

Gabriella's sign read: "We Miss You Mommy," while Jacques' said: "We Love You Mommy."

Tuned into his kids' feelings, a palace source told PEOPLE that Prince Albert was doing everything he could to be there for the twins.

"Prince Albert said he wanted today to be as close to a normal National Day as possible," the source said at the time. "And in particular, as much as can be for the children."

Missing her family just as much, Charlene shouted out Jacques and Gabriella on social media a few weeks later in honor of their 7th birthday on Dec. 10.

"Happy birthday my babies," she wrote, posting photos from her kids' celebrations at the palace. "Thank you God for blessing me with such wonderful children. I'm truly blessed. Love mom.❤️"

A Different Kind of Christmas Card

Ahead of the holiday, Charlene released her family's Christmas portrait on her Instagram page. Breaking with their typical tradition of a glamorous Christmas photo, the illustration showed the princess with Albert, Jacques and Gabriella before a festive fir.

"Wishing everyone a beautiful and safe festive season all my love ❤," Charlene captioned the snap.

Around the same time, a palace statement shared with PEOPLE confirmed that Charlene would be visited over the holidays by her husband and kids.

"Princess Charlene is recuperating in a satisfactory and reassuring manner, although it may take a few more months before her health has reached a full recovery," the statement said.

Princess Charlene turned 44 on Jan. 25, 2022, and shared a special video created in her honor to mark the milestone. The clip celebrated the reigning princess' life story, from Olympic swimmer to her her royal wedding, motherhood and charity work.

The same week, the palace confirmed that Charlene would be absent from the royal family's annual celebrations for Saint Dévote Day on Jan. 27 as she continued to recover – and that things were looking up.

The "convalescence of H.S.H. Princess Charlene is currently continuing in a satisfying and very encouraging way," a translation of the palace's statement in French read.

On March 12, PEOPLE exclusively reported Charlene returned to Monaco and reunited with her family earlier in the week.

A palace statement confirmed that the mother of two will continue her "convalescence in the Principality with her husband and her children by her side."

Charlene had been receiving care in a Swiss clinic since November. Her return to Monaco after four months, in consultation with her physicians, is a result of her "encouraging recovery," per palace communication sent to PEOPLE. 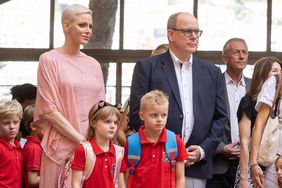 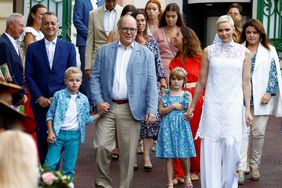