"My mother, she’d be driving along, singing at the top of her voice," William shares in a special Christmas episode of Apple Fitness+'s Time to Walk series

Prince William is opening up about a special childhood memory of his mother, Princess Diana, and the song she would play for him and Prince Harry to ease their back-to-school anxieties.

In an upcoming episode of Apple Fitness+'s Time to Walk series on Dec. 6, William takes listeners on a walk through his grandmother Queen Elizabeth's Sandringham Estate as he shares personal, life-shaping moments in an effort to promote mental and physical wellbeing through walking. He also chooses three of his favorite songs and explains why they are important to him.

One of those songs is a tune his mom Diana would play in the car for her sons on the way to school.

For more on Prince William's episode of Time to Walk and other top stories, listen below to our daily podcast on PEOPLE Every Day.

"When I was younger, Harry and I, we were at boarding school. And my mother used to play all sorts of songs to kind of while away the anxiety of going back to school. And one of the songs I massively remember and has stuck with me all this time, and I still, to this day, still quite enjoy secretly, is Tina Turner's 'The Best' because sitting in the backseat, singing away, it felt like a real family moment. And my mother, she'd be driving along, singing at the top of her voice. And we'd even get the policeman in the car, he'd be occasionally singing along, as well," William shares.

"You'd be singing and listening to the music right the way out into the gates of school, when they dropped you off," he continues. "And, and that's when reality kind of sunk in that you really were going back to school because before that, you're lost in songs. You'll want to play it again just to keep that family moment going.

"When I listen to it now, it takes me back to those car rides and brings back lots of memories of my mother."

"Most mornings there's a massive fight between Charlotte and George as to what song is played in the morning. And I have to, now, basically prioritize that one day someone does this one, and another day it's someone else's turn. So George gets his go, then Charlotte gets her go. Such is the, the clamor for the music," he shares.

The royal says one of the songs his children are loving at the moment is Shakira's "Waka Waka."

There's nothing better than, on a Monday morning, when you're a bit bleary-eyed after the weekend and trying to get yourself back into the grind of the week, listening to AC/DC, 'Thunderstruck,' he says.

"I have to say the first time I put it on, and I've heard it a million times now, I was kind of like, 'Well, this is quite heavy for a Monday morning.' But now, when I listen to it, it's the best tonic for a Monday morning," he continues. "It absolutely wakes you up, puts your week in the best mood possible, and you feel like you can take on anything and anyone.

"I'd imagine you're going to walk quite fast listening to it, maybe with a skip in your step, with the head-banging. It's a difficult song not to dance to or to nod along to."

Apple will stream three special audio airings of William's Time to Walk episode for free on Apple Music 1, the flagship global radio station on Apple Music, on Dec. 6. He approached Apple to take part as he was impressed with Time to Walk and how it coincided with his efforts to promote better mental health and wellbeing.

Of the experience, William says, "I feel like I've shared a lot of feelings that makes me feel like it's been an even better walk than normal. Feels like I've been on a walk with a best mate or my wife." 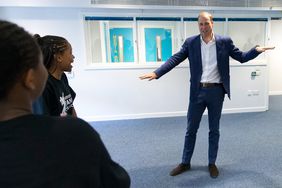 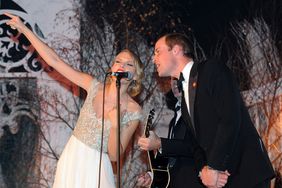