The cousins have been standing by each other's side since 1985

By now you’ve seen the GIF that went viral from Trooping the Colour at Buckingham Palace on Saturday. Prince George’s cousin, Savannah Phillips, mischievously put her hand over the future king’s mouth during the ceremony — and had a devious smirk while doing so! But this playful behavior between cousins has been going on since their dads, Prince William and Peter Phillips, began their balcony appearances 33 years ago.

Peter Phillips is Prince William’s first cousin and has been standing by his cousin’s side for years, pictured above in 1985.

Joe Little, managing editor of Majesty magazine, tells PEOPLE that Peter and William were close as teenagers and that bond continues with their children.

“They looked like they were having fun, particularly the kids,” Little says about the event, which honors Queen Elizabeth’s birthday. “There is a closeness with the Phillips’ kids, which is great to see. William and Peter Phillips were close when William was a teenager and that has continued into the next generation.”

And this year, the event had so many family members in attendance (including the newest royal family addition, Meghan Markle!), that it was a packed balcony. “With all the children there were almost too many people on there,” Little says.

Phillips is the eldest child of Princess Anne (Queen Elizabeth’s only daughter) and her first husband, Captain Mark Phillips. He and his wife, Autumn Phillips, have two daughters, Savannah, the Queen’s first great-grandchild, who was born in 2010 and Isla, who was born in 2012.

Peter has attended countless Troopings together throughout the years, pictured above in 1986 alongside Prince William and Prince Harry and his sister Zara.

And the cousins have celebrated their grandmother’s birthday together for years. They were photographed, above, at the Patron’s Lunch celebrations to mark Queen Elizabeth II’s 90th birthday in 2016.

In additon to the Queen, who has never missed a Trooping, Peter’s mom, Princess Anne, was on-hand along with Prince William and Kate Middleton, and their children, Prince George and Princess Charlotte (Prince Louis stayed home during the festivities!). Prince Philip, Prince Charles, Camilla, Duchess of Cornwall, Prince Harry and Meghan Markle.

They all gathered on the balcony to watch the Royal Air Force flypast. 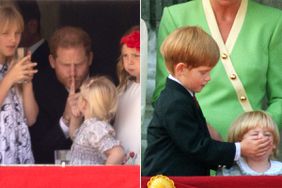