Prince William and Kate Middleton are celebrating the arts!

The royal parents-to-be visited Sunderland in North East England on Wednesday to promote the city’s arts and music scene, including the official opening of the Fire Station, one of the city’s most iconic buildings that was recently converted into a hub for artists.

In addition, the couple toured the Northern Spire, a new bridge over the River Wear that is due to open in the spring.

William and Kate, wearing a Dolce and Gabbana coat, also met local children (and a 101-year-old woman!) who will benefit from the bridge in the future, as well the engineers and construction workers who were involved in the making of the bridge.

RELATED GALLERY: Will and Kate’s Looks of Love! 10 Moments That Prove They’re More Smitten Than Ever

The celebration of Sunderland’s arts and culture comes after Kate talked about her love for photography for London’s National Portrait Gallery, which will debut the exhibition Victorian Giants: The Birth of Art Photography, on Feb. 28.

Kate, who frequently snaps official photos of her kids, Prince George and Princess Charlotte, wrote the page-long foreword in which she dubbed herself an “enthusiastic amateur photographer.” (Fun fact: Kate studied art history at the University of St. Andrews where she met Prince William in their shared freshman dorm!)

“Photographs of children in particular are of real interest to me,” the mother-to-be explained.

It has been a busy week for William and Kate, as they had attended the annual BAFTA Awards (the British equivalent of the Oscars) on Sunday. Then, on Monday, Kate co-hosted the Commonwealth Fashion Exchange reception at the palace while the future heir enjoyed a motorcycle ride during a visit to the headquarters of Triumph Motorcycles (the largest British motorcycle manufacturer) and the MIRA Technology Park in Hinckley, England, on Tuesday. 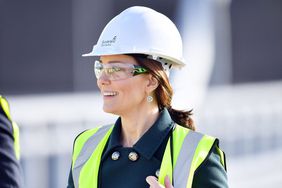 Kate Middleton Wears a Hard Hat — and Gets a Henna Tattoo! — at 7 Months Pregnant