Prince William not only loves to cook chicken at home, but he seems to love the dish while he’s out and about as well.

The royal dad, who was attending the Next Generation Impact Entrepreneurs Forum on Tuesday, shared that he’s a fan of Nando’s — a Mozambique-Portuguese-inspired fast food chain — after he was introduced to the eatery by one of his protection officers.

The casual dining spot, which has locations across the world, including several in Illinois, Virginia, Maryland and Washington D.C., is known for its famous peri-peri chicken — chicken that is marinated in African Bird’s Eye chili peppers.

At the event, William, 35, told Robert Brozin, who started the company in Johannesburg, South Africa in 1987, that he recently started eating the eatery’s spicy chicken.

“This man here is your biggest fan, he’s introduced me to Nando’s,” the Prince said referring to his police protection officer. “It’s very good.”

While the Prince likes Nando’s – which is very popular with the people in his Kingdom – he said his protection officer is such a fan he “he should buy a stake in Nando’s.”

Did Prince William Just Accidentally Reveal Whether He and Kate Are Having a Boy or Girl?

But Brozin wasn’t surprised that William had eaten his food.

“I’m not surprised he’s eaten at Nando’s,” shared Brozin, adding that “the beauty of Prince Harry and Prince William is that they’re really accessible and they are guys that go out a lot – I’m very happy that they’ve tried it.”

As for why he was so sure William had eaten his food before, Brozin said he was “certain they would have tried it because they’re so accessible they’re people’s people, which is so nice.”

And when it comes to the secret behind the success of his food, which is reportedly also enjoyed by stars like Oprah Winfrey, Jay-Z, David Beckham, Ricky Gervais and Rihanna, Brozin says it’s “the people that work for us and the product obviously, it’s the people that make the chicken.”

William also talked about his hopes for the Royal Foundation, which he founded with brother Harry and Kate Middleton seven years ago. (Meghan Markle will also join the foundation after the royal wedding in May.)

“We, as the Royal Foundation, can help lead, but if we can connect to some of those bigger foundations in the world and come together with one message, imagine the focus and the change,” William said during the roundtable discussion.

“I like the idea of a team,” added William. “It’s all about how we work together.” 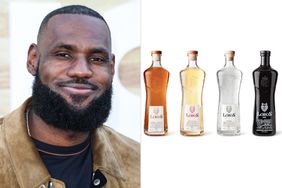