How Prince William Is Creating the Same 'Loving, Caring, Fun Home' as His Mom Princess Diana

As a new dad of three, Prince William has his hands full at home at Kensington Palace — and he wouldn't have it any other way

As a new dad of three, Prince William has his hands full at home at Kensington Palace — and he wouldn’t have it any other way.

As their family grows, William and his wife, Kate Middleton, have shown a united front, and they have the support of their family behind them — as evident by everyone who gathered to celebrate Prince Louis’ royal christening on Monday.

Of course, the absence of William’s mother, Princess Diana, continues to be felt even 21 years after her death at age 36.

“[William] can do all the things that he thinks are important for family life and make sure that his children have that loving, caring, fun home that his mother was trying to create,” says a royal source.

Growing up with a hands-on mother like Diana has shaped his own parenting style. During royal outings with Prince George and Princess Charlotte, he always holds their hands, and gets down on their level to explain their surroundings to them during high-profile events. (A move grandma Queen Elizabeth has even scolded him for!).

William said he talks to his children about the grandmother they never go to meet, and he and Kate have filled their home with photos of her.

“At all these landmark moments, [William’s] mother is missing, and it’s sad,” the source continues. “But they are creating their own legacy now.” 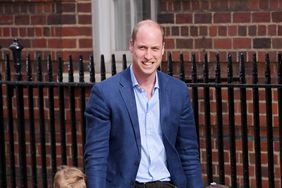