Does royal star power get any bigger?

Capping off their first full day in New York City, Prince William and Princess Kate showed up at the Barclays Center Monday night to watch the Brooklyn Nets take on the Cleveland Cavaliers.

But the game was a sideshow to the real event – the Duke and Duchess’s meeting America’s royal couple of music, Beyoncé and husband Jay Z.

And if that weren’t enough, the game’s undisputed star player was none other than the Cavaliers’ LeBron James, a.k.a. “King James.”

The royal couple took their seats opposite the music superstars just a few minutes into the third quarter. William was sitting with the new ambassador to his United for Wildlife charity, Dikembe Mutombo.

After that quarter, Beyoncé led the way, walking from one side of the court to the other to greet Kate and Will. They then all chatted together for a few minutes before going back to their seats.

“Jay Z wished Will and Kate ‘Merry Christmas’ when he was talking to them,” said an eyewitness.

The fun evening had a serious cause behind it: The National Basketball Association is partnering with United for Wildlife to help fight illegal wildlife trafficking.

With William a fan of the sport, such an association is perfect. Earlier Monday, at a reception for the Tusk Trust, the prince concluded his remarks by saying, “I’m off to shoot some hoops now or whatever it is you do.”

R. Couri Hay, a New York society publicist who knows members of the royal family, says Will is actually a bit of a pickup player himself.

“Will has told friends he is excited about going to the game because he and Harry love playing basketball,” Hay told PEOPLE.

Sure enough, during a pre-game photo call with top NBA executives and former player Mutombo, William held a ball and joked, “This is where I should be spinning it on my finger.”

Kate – in a grey coat by American designer Tory Burch and black jeans – brought him back to earth, telling him, “You are going to pretend you can actually score.”

The entire spirit of the pre-game gathering was lighthearted. With Mutombo towering over him, the 6’3″ William quipped, “At last I’m standing next to someone who is taller than me.” 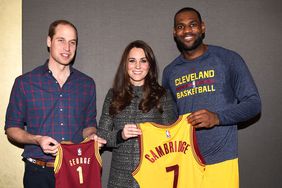 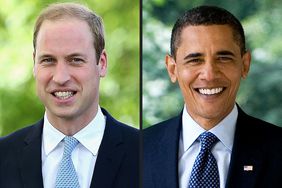 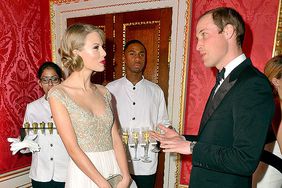 Will and Kate's Celeb Scrapbook: All the Stars They've Met