Prince Philip hasn't lost his charm at 96, as evidenced by a brand new portrait of the royal

Prince Philip hasn’t lost his charm at 96, as evidenced by a brand new portrait of the royal.

The Prince’s background and heritage is being celebrated in the new portrait created for the Museum of National History at Frederiksborg Castle in Denmark by Australian born artist Ralph Heimans.

Set in the Grand Corridor at Windsor Castle, Prince Philip is shown wearing the sash of the Order of the Elephant, Denmark’s highest-ranking honor, in the portrait.

Windsor Castle, where he and his wife Queen Elizabeth spend most weekends, also holds special significance in regard to Philip’s ancestry. At the end of the Grand Corridor is the Tapestry Room, where Philip’s’ mother, Princess Alice, and maternal grandmother, Princess Victoria, were born. The women appear in the painting that hangs on the right side of the Grand Corridor, in the company of Queen Victoria.

The corridor in the portrait is also decorated with significant clues to Philip’s heritage as both a white marble bust of Princess Alice by Joseph von Kopf and another of Princess Victoria by Hugo Hagen are visible.

The portrait also shows off a Royal Copenhagen porcelain ‘Flora Danica’ dinner and dessert service. The service — which consists of 725 pieces, for 60 place settings — was a wedding gift from Albert Edward, Prince of Wales, to Princess Alexandra of Denmark in 1863.

Additional pieces were presented as a wedding gift to the then Princess Elizabeth and Prince Philip in 1947, from the King and Queen of Denmark.

And there’s yet another detail about Philip’s heritage that’s on display in the new portrait: the painting he is seen standing in front of, which depicts Queen Victoria sitting with her family in Windsor Castle’s Green Drawing Room, was painted by Laurits Regner Tuxen. Victoria had so admired a picture Tuxen had painted of the family of the King and Queen of Denmark that she asked for one herself.

Prince Philip is connected to Denmark through his grandfather, George I (of Greece) who was originally a Danish prince born in Copenhagen. His great grandfather, Christian IX, was King of Denmark from 1863 to 1906.

The Museum of National History at Frederiksborg Castle in Denmark will be holding a retrospective exhibition of Heimans’ work in 2018, part of which aims to explore the historical and cultural connections between the royal families of Great Britain and Denmark.

Further information about the exhibition will be announced by the National History Museum ahead of its opening. The portrait will also go on display in the United Kingdom in 2018 with details to be announced.

2017 has been a big year for both Prince Philip and Queen Elizabeth. In May, Philip stepped down from his duties as his wife’s public consort after 70 years of service and on Friday, a new chapter of his life began being told in great depth as season 2 of The Crown was released. 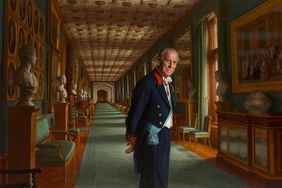