Prince Louis is 2 — the same age as big brother Prince George and big sister Princess Charlotte when they started school — but Louis isn't strapping on his backpack just yet.

Should Kate Middleton and Prince William's youngest child follow the path of his older siblings, Prince Louis will likely begin nursery school in January 2021 rather than at the typical start of the new school year.

In January 2016, Prince George, now 7, headed to preschool at the Westacre Montessori School in Norfolk, a short drive from the family's country home, Anmer Hall. Like many proud moms, Kate snapped his first day of school photos, complete with a blue backpack.

Princess Charlotte, now 5, was around the same age as her big brother when she began attending Willcocks Nursery School in January 2018. Before she headed off to the preschool, located close to the family’s Kensington Palace home in London, Kate took photos of her daughter posing on the palace steps in a red jacket (with matching shoes!) and pink backpack.

A royal source told PEOPLE at the time, "They chose that nursery because they thought it would be an ideal first step for Charlotte’s education, and they were impressed by the team who work there."

It's likely that Prince Louis will also start preschool at Willcocks in London, given that Prince George and Princess Charlotte both attend Thomas's Battersea nearby. Last year, Princess Charlotte was escorted to her first day at her new school by Prince George and their parents. The royal children were both wearing the uniforms required by the $23,000-a-year private school.

“She can’t wait to be with George at big school,” an insider previously told PEOPLE. “She is so excited about it all.”

The milestone marked a special moment for the family. When George started at the same school in 2017, Kate was unable to join him because she was ill with severe morning sickness during her pregnancy with Prince Louis.

Like families around the world, the Cambridges had to adjust to remote learning amid the coronavirus pandemic.

Kate revealed during a virtual appearance on ITV's This Morning in May that it's been a challenge to get George excited about his own schoolwork when he has Charlotte's "cooler" assignments as a comparison.

“We're stuck into homeschooling again," Kate said. “George gets very upset because he just wants to do all of Charlotte’s projects. Spider sandwiches are far cooler than literacy work!”

Even before officially starting school, Prince Louis is doing some projects of his own. In honor of his second birthday in April, Kate shared photos of her youngest son making rainbow-colored paintings in support of National Health Service (NHS) workers and other essential workers tackling the coronavirus pandemic across the country.

"I should’ve taken a photograph of what I looked like after as well! Luckily, that wasn’t documented but I was pretty much, I looked like Louis at the end of those," she revealed. 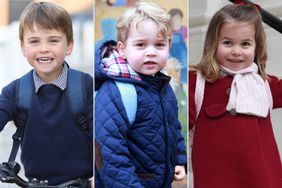 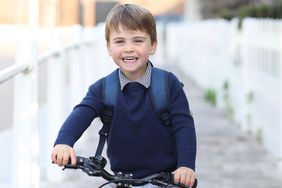 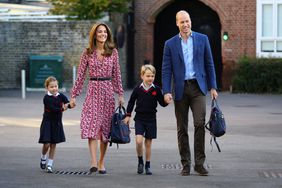 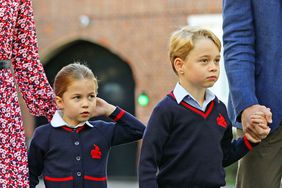