Since welcoming baby Lili, sister to Archie, Prince Harry said, "I feel all the more connected, inspired and in awe of the resilience of these families" involved with his patronage, WellChild

Prince Harry finished five days of isolation just in time to celebrate honorees of a charity he holds close to his heart.

Harry, who is the patron of the WellChild U.K. children's charity, made an appearance at the WellChild Awards at a private garden party at Kew Gardens, London, on Wednesday.

"The Duke of Sussex met each winner in turn to congratulate them as they received their Award," according to a release from the organization. "The Duke then had an informal chat with all the winners where he heard how the last 18 months had been for them and their families and how they had received support from WellChild and from each other through the WellChild Family Tree community."

Harry, 36, said in the statement: "Since becoming patron of WellChild in 2007, this organisation and the people within it have held an extraordinarily special place in my heart. I wasn't a father at the time, and yet the stories of these children and parents transcended that. I didn't need to be a dad to feel the impact of this invaluable work. Now as a father of two, I feel all the more connected, inspired and in awe of the resilience of these families, who power through indescribable challenges with the support of WellChild."

He added, "The health of our children, of all of us, could not have been more on the forefront of our minds during the past year. And, throughout this time, the WellChild community has set an example for how to show up and act with compassion for each other. I could not be prouder to be here, to meet this year's WellChild Award winners, to thank the nurses and doctors for all they do, and to celebrate these amazing families."

The Duke of Sussex, 36, returned to the U.K. last Friday in order to allow himself enough time to isolate for five days, per COVID guidance.

He will join his brother, Prince William, in unveiling a statue dedicated to their late mother, Princess Diana, at Kensington Palace's Sunken Garden on Thursday, which would have been her 60th birthday.

Despite isolating at Frogmore Cottage, his residence in Windsor, this is the second opportunity Harry has had this week to acknowledge people embodying the spirit of philanthropy his mother displayed in her life.

On Monday, he appeared in a video at the Diana Awards, telling recipients, "Our mum believed that young people have the power to change the world. She believed in your strength because she saw it day in and day out and in the faces of young people exactly like you, she witnessed a boundless enthusiasm and passion."

He added of wife Meghan Markle: "Meg and I fundamentally believe that our world is at the cusp of change, real change for the good of all."

"Later this week, my brother and I are recognizing what would have been our mum's 60th birthday," Harry continued, "and she would be so proud of you all for living authentic life with purpose and with compassion for others."

For his part, William has been traveling the country ahead of Thursday's unveiling, including events in Scotland with Queen Elizabeth and solo in the early half of the week, as well as a family night out on Tuesday with Kate Middleton and Prince George to watch England best Germany in this year's UEFA Euro soccer tournament.

In the brothers' joint statement announcing the statue, they said, "The Princes hope that the statue will help all those who visit Kensington Palace to reflect on their mother's life and her legacy." 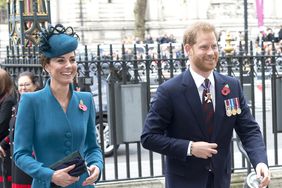