While there were talks of the couple's desire to embark on a different path, Wednesday's statement came without prior warning to the Queen

Prince Harry and Meghan Markle‘s bombshell announcement that they intend to “step back as senior members of the Royal Family” was released despite warnings from Queen Elizabeth and Prince Charles to hold off, according to a new report in the Evening Standard.

While there had been “early” talks of the couple’s desire to embark on a different path amongst the royal family, Wednesday’s statement — released on Meghan and Harry’s Instagram page and newly launched website — came without prior notice.

Prince Harry approached his father about spending more time in North America ahead of Christmas, which was met with the need to come up with a thorough plan,” reports the Evening Standard. The 35-year-old royal drafted a proposal for Prince Charles in early January, however, he was told that they needed time to figure out details such as funding.

Prince Harry then asked to meet with his grandmother Queen Elizabeth upon his return from Canada, according to the outlet. While she agreed to meet, she explained that plans for his role should be handled by Prince Charles. The meeting between the Queen and Harry was blocked by courtiers, but the 93-year-old monarch maintained that Prince Harry and Meghan should not make any announcement regarding their future plans.

Prince Charles and Prince William were reportedly given a copy of the Duke and Duchess of Sussex’s statement “10 minutes” before it was released to the public.

It’s clear that the monarch wants to reach a conclusion quickly.

On Wednesday, Harry and Meghan revealed their plans to “carve out a progressive new role within this institution,” they wrote in a statement on Instagram. 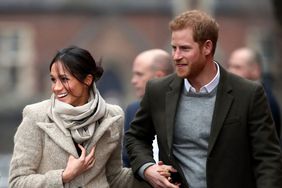