It may come as a surprise that the royal was also king of the grill!

Everyone loves a family cookout — especially over Memorial Day weekend. And it turns out the time-honored tradition of firing up the grill is also a favorite of the British royal family.

As Prince Harry paid tribute to his late grandfather Prince Philip last month, he lovingly referred to the Duke of Edinburgh as "master of the barbecue." It may come as a surprise that the royal, who was the patriarch of the royal family, was also king of the grill.

While Philip and his wife Queen Elizabeth had a team of chefs at the ready at Buckingham Palace and Windsor Castle, it was Philip who liked to take charge of the royal menu when the family vacationed at Balmoral Castle in Scotland.

The royal's love of an old-fashioned cookout was explored in the biography, Queen of the World by Robert Hardman. Philip would "relish the prospect of setting up his barbecue in the unlikeliest spots – and cooking anything that took his fancy," the author wrote.

In the book, the Queen's former equerry, Sir Robert Woodward, said, "He'd lead ashore with all the barbecue kit and the Queen would come later with the salad supplies and all the side dishes.

"He's a brilliant and very innovative cook. If you produced any strange animal out of the sea, he'd prepare it and cook it. You shouldn't be surprised if you ate an octopus."

Philip's relaxed ease behind the grill was captured in an intimate photo of the royal family's summer holiday at Balmoral in 1972. In the snap, Philip cooks alongside his daughter Princess Anne. (The unguarded moment was even recreated in season three of The Crown!) 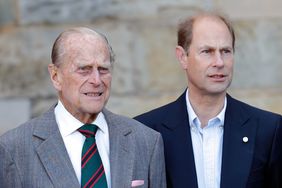