Earlier in the tour, the Duchess of Sussex called husband Prince Harry "the best dad."

Meghan Markle and Prince Harry’s son Archie is in the royal spotlight!

The proud parents took their almost 5-month-old son on his first royal engagement on Wednesday to meet one of South Africa’s most well-known human rights activists, Archbishop Desmond Tutu. During the outing at Tutu’s foundation in Cape Town, South Africa, Meghan and Harry revealed new details about their son, who was born on May 6.

“He constantly wants to stand,” Harry said as his son playfully stood up on the couch in Meghan’s arms.

“I think he is used to it already,” Harry said of his son as the famed anti-apartheid activist and his daughter, Thandeka Tutu-Gxashe, looked on.

Archie was calm and attentive throughout his first outing as he smiled at his hosts and played in his mother’s lap.

After the outing, the couple posted a sweet black-and-white shot of Archie on their Instagram, alongside the caption: “Thank you Archbishop Tutu for your incredibly warm hospitality, Archie loved meeting you!” – The Duke and Duchess.

The family of three touched down in Cape Town, South Africa, on Monday as the Duke and Duchess of Sussex kick off their 10-day tour, which includes stops in South Africa, Botswana, Angola and Malawi. (Meghan and Archie will remain in South Africa while Harry travels throughout Africa.)

Meghan was pictured coming off the plane with Archie, 4 months, in her arms on Monday morning. In a touching tribute to Princess Diana, Archie was seen wearing a white knit hat that was very similar to the one Diana chose for a baby Harry to wear in January 1985 as they stepped off a plane in at Aberdeen Airport. Harry was also around 4 months old at the time.

Meghan and Harry left little Archie — who was born on May 6 — with his nanny as they started the official first leg of the tour earlier in the week. But Archie wasn’t far from fans’ minds during Monday’s outings. An excited onlooker hugged Meghan and Harry as she asked them: “Where’s Archie?”

During outings on Tuesday, Meghan revealed that life as a family of three is “busy.”

Meghan also praised her husband’s skills as a new father, calling him “the best dad,” while Harry replied, “No, she’s the best mom.” 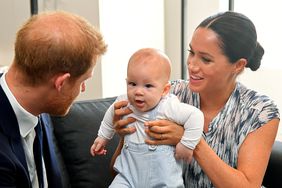