'When Is the Real Prince Coming?' — Harry Has Best Reaction When Boy Doesn't Believe He's a Royal

This isn't the first time that Prince Harry, who is expecting his first child next month with wife Meghan Markle, has had a run-in with a non-believer

Will the real Prince Harry please stand up?

As the royal met children on the playground of St. Vincent’s Catholic Primary School in Acton on Wednesday, the excited students chanted his name.

One, however, was not sure he was a real prince. Teaching assistant Philomena Frattura said: “One of them tapped him and said, ‘When is Prince Harry coming?’

“The student then said, ‘When is the real Prince Harry coming?’

“Harry replied, ‘I’m the real Harry. I’ve just had my hair cut for the occasion.’ ”

The puzzled boy, Emmanuel Osei, 4, was eventually persuaded that it was the real Harry. And he was rewarded with a high-five from the spring.

Learning mentor Diane Redmond said: “They think a prince should have a crown.”

This isn’t the first time that Prince Harry, who is expecting his first child next month with wife Meghan Markle, has had a run-in with a non-believer.

In 2016, he told PEOPLE in an exclusive interview that children often don’t believe he is a real-life prince because he doesn’t always look the part.

“Every time I get to meet kids and they have been told a real-life prince is coming, the disappointment on their faces when they see me without a crown or a cape ” he said with a smile.

Harry, who was getting ready to travel to Orlando, Florida, at the time for the Invictus Games, said: “I’m worried because the American kids, especially next to Disney World, are going to be thinking, ‘You ain’t no prince, you ain’t dressed like a prince, you’re having a laugh!’

“So I am going to pack a crown and a cape this time and some funny pointy-toed shoes. I’m going to sign the crown out!” 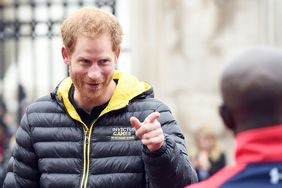 Prince Harry Jokes That American Kids Will Say, 'You Ain't No Prince!' and Says: 'I'm Going to Sign the Crown Out!'