From full beards to dapper mustaches, royal men around the world have experimented with different looks

Prince Hairy, perhaps? His red hair has always been his trademark, but Prince Harry has been experimenting with a beard since 2013 when he completed a charity trek to the South Pole with Walking With The Wounded. Despite shaving shortly after, Harry went back and has been sporting the facial hair for years, including his May 2018 royal wedding to Meghan Markle.

Prince William is always clean-shaven, partially thanks to his time in the Royal Air Force where facial hair is forbidden, but there was one exception. He surprised royal fans when he joined his family for Christmas Day in 2008 with a bit of scruff, before he quickly went back to being facial hair free.

William and Harry's dad has also grown out his beard for short stints. If you ask us, the beard look gives a strong resemblance to his younger son!

Prince Philip always looked like a gentleman with a clean-shaven face, but he grew out his beard during a solo tour aboard the Royal Yacht Britannia on a voyage around the Commonwealth in 1965. The opportunity was perfect for Queen Elizabeth to play a prank on her husband.

"Knowing that he had grown a beard on his travels, the Queen had arranged for everyone in the royal entourage — herself included — to put on fake whiskers just before the Duke walked in," Robert Hardman said his book Queen of the World.

The son of King Carl XVI Gustaf and Queen Silvia has rocked a beard for years, including at his royal wedding to Princess Sofia in June 2015. But behind his facial hair is a cute baby face!

Prince Haakon's beard is his go-to look, but he's not opposed to some change. At a gala dinner in honor of parents King Harald and Queen Sonja's 80th birthdays in 2017, he arrived with a beard and left without one! Photographer Heiko Junge told Hello! magazine that the royal had shaved "as part of the entertainment during the gala dinner."

Spain's king has been sporting a beard for years, even embracing it has he goes grey.

King Willem-Alexander of the Netherlands

The Netherlands' monarch started growing out his facial hair in 2017, and he must have liked the results: he stills rocks a beard!

Kate Middleton's younger brother had been growing out his facial hair for so long that he realized his now-wife Alizee had never seen him without a beard. He decided to surprise her in 2020 by shaving! A kiss confirmed she was a fan of the makeover.

Zara Tindall's husband has gone back and forth with a beard — luckily, he looks great either way.

The grandson of Prince Rainier and Grace Kelly, Princess of Monaco looks dapper whether he's clean-shaven or sporting a beard (like he did while sailing across the Atlantic with Greta Thunberg).

Another Casiraghi brother has also tried out a beard, looking dapper with or without.

The second son of Grand Duke Henri and Grand Duchess Maria Teresa was sporting scruff for his 2013 civil ceremony ... but went beardless for the official wedding a few days later.

The future monarch currently rocks a salt and pepper beard, but we can get behind his fresh face look too.

Usually clean-shaven, Prince Albert once experimented with a mustache in the style of his father Prince Rainier. 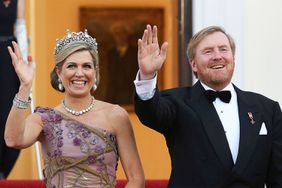 Why Queen Máxima of the Netherlands Is Traveling to the U.S. Without Her Husband