Prince Harry may not be a fan of selfies, but he has clearly mastered the art of the photobomb.

The royal, 31, snuck in a goofy face while model Winnie Harlow was talking with her agent at the Audi Polo Challenge on Saturday. Like any good victim of a superstar photobomb, Harlow shared it on Instagram.

“When you’re trying to have a serious convo but your agent and Prince Harry aren’t serious at all,” she wrote, alongside a laughing-and-crying emoji.

Later, Harlow shared another shot of Harry and Prince William chatting with their table mates in the background.

Harlow, who starred on America’s Next Top Model and famously made an appearance in Beyoncé‘s Lemonade, wasn’t the only star that William and Harry mingled with at the event. The two princes took a break from the charity polo match to chat with Mad Max: Fury Road star Tom Hardy and his wife, Charlotte Riley. They also posed for photos alongside singer (and friend-of-the-royals) Ellie Goulding.

William and Harry are longtime polo fans and often take up the mallet for high-profile charity events. The princes’ office announced on Friday that since 2007, the brothers have raised a combined $13.9 million by playing polo for charity. 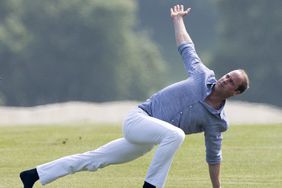 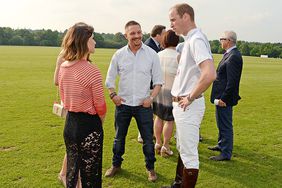 Mad Max Cleans Up for Polo! Princes William and Harry Team with Tom Hardy at Match