"It would be much safer to enjoy their good fortune and stay silent," writes chef José Andrés of friends Meghan Markle and Prince Harry

Prince Harry got a very powerful birthday present on Wednesday as he and Meghan Markle appeared on the cover of TIME magazine's 100 Most Influential People in the World issue.

TIME released the full roster of honorees on Wednesday before the annual special edition hits newsstands on September 17, and this new portrait marks the first time the couple has formally posed together for a magazine cover shoot.

"Springing into action is not the easy choice for a young duke and duchess who have been blessed through birth and talent, and burned by fame," José Andrés, founder of World Central Kitchen, writes about the couple. The non-profit, which has now delivered more than 500,000 hot meals to earthquake-stricken Haiti, is an official partner of Harry and Meghan's Archewell Foundation.

"It would be much safer to enjoy their good fortune and stay silent," he adds. "That's not what Harry and Meghan do, or who they are.... In a world where everyone has an opinion about people they don't know, the duke and duchess have compassion for the people they don't know. They don't just opine. They run toward the struggle."

On the cover, Meghan wears a white shirt with matching high-waisted trousers while Harry leans on her shoulder in an all-black outfit. Further pictures show the Duke of Sussex, who turns 37 today, and the Duchess, 40, looking composed but serious beside a window in complementary olive-colored outfits and smilingly walking hand-in-hand through the dappled sunshine cast by a low-hanging tree.

For the second year in a row, TIME Studios and ABC will also bring the TIME100 list to life with a special television event on September 20 at 10 p.m. ET, offering viewers "an entertainment-filled inside look at the pioneers, artists, leaders, icons, titans and innovators comprising the 2021 list," says a release.

This is the latest occasion that Harry and Meghan have publicly associated themselves with TIME100.

Last September, they encouraged democratic participation in an ABC special ahead of the 2020 U.S. Presidential election.

"Every four years, we're told, 'This is the most important election of our lifetime.' But this one is," said Meghan. "When we vote, our values are put into action, and our voices are heard."

In October 2020, the couple — who have enjoyed some family downtime since the arrival of daughter Lilibet Diana on June 4 — hosted a special edition of TIME100 Talks, centered around the topic of "Engineering a Better World." Guests included Reddit co-founder Alexis Ohanian (who's married to Meghan's pal Serena Williams!) and the hosts of the Teenager Therapy podcast, on which the Duke and Duchess appeared in 2020 to celebrate World Mental Health Day.

"For us, we're trying to embrace all of the quality time we get with our son right now and to not miss a single moment of his growth and development, which has been really special," Meghan said at the talk about then-1-year-old Archie.

The couple also spoke at length about the negative influence of social media and the impact of the COVID-19 pandemic on them as a family.

"I think when people ask, 'How are you?' I sense, you know, it's a case of 'Really, how are you?'" said Harry in response to a question from TIME Editor-in-Chief Edward Felsenthal.

"Before this year, I think everyone sort of throws that term around and everyone's satisfied with a 'Yeah, I'm good. I'm fine, thanks.' And then it's moving on to something else," Harry added. "But I think you're quite right. This year, more so than ever, it really is a question of 'No, no, no. Actually, how are you?'" 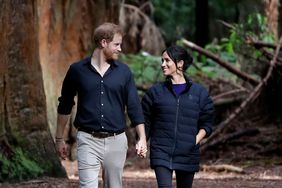